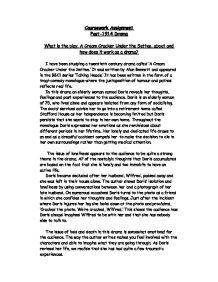 What is the play, A Cream Cracker Under the Settee, about and how does it work as a drama?

Coursework Assignment Post-1914 Drama What is the play, A Cream Cracker Under the Settee, about and how does it work as a drama? I have been studying a twentieth century drama called 'A Cream Cracker Under the Settee.' It was written by Alan Bennett and appeared in the BBC1 series 'Talking Heads.' It has been written in the form of a tragi-comedy monologue where the juxtaposition of humour and pathos reflects real life. In this drama an elderly woman named Doris reveals her thoughts, feelings and past experiences to the audience. Doris is an elderly woman of 75, who lives alone and appears isolated from any form of socialising. The social services advise her to go into a retirement home called Stafford House as her independence is becoming limited but Doris persists that she wants to stay in her own home. Throughout the monologue Doris expresses her emotions as she reminisces about different periods in her lifetime. Her lonely and dedicated life draws to an end as a dreadful accident compels her to make the decision to die in her own surroundings rather than getting medical attention. The issue of loneliness appears to the audience to be quite a strong theme in the drama. All of the nostalgic thoughts that Doris accumulates are based on the fact that she is lonely and too immobile to have an active life. Doris became secluded after her husband, Wilfred, passed away and she was left in their house alone. The author shows Doris' isolation and loneliness by using conversations between her and a photograph of her late husband. On numerous occasions Doris turns to the photo as a friend in which she confides her thoughts and feelings. Just after the incident where Doris injures her leg she looks down at the photo and proclaims, 'Cracked the photo. We're cracked, Wilfred.' This shows the audience how Doris always imagines Wilfred to be with her and that she has nobody else to talk to. ...read more.

Done it now, Wilfred.' The life choice has been made and Doris closes her eyes as her life has drawn to an end. In the drama the audience would gradually gain a much better insight on Doris' character as she reveals a lot of detail about herself by what she does and the idiolect that she uses. The writer has developed Doris' character into being a kind and loving person. She has a lot of individual features that combine together to create who she is. Doris seems to be very house-proud and something of a perfectionist. She expects Zulema to perform every task up to her own hygienic standards and criticises her efforts at every opportunity. On one occasion Doris complains, 'She's not half done this place.' Doris' character appears to be quite defensive. This is shown when she strongly objects at the assumption people make from the leaves up and down her path. She defends her name by making it clear to the audience that they're not her responsibility. She uses a stern tone of voice and exclaims, 'We've only got the one little bush and it's an evergreen so I'm certain they're not my leaves.' Doris also shows a humorous side to her. During the monologue she turns some serious matters into jokes and defines for the audience her sense of humour. When Doris gets annoyed after Jehovah's Witnesses keep leaving her gate open she changes the moment from anger to laughter after saying, 'Love God and close all gates.' This is showing the tragi-comedy in the play. Doris' tone changes rapidly as she uses humour and then pathos. The audience can establish from Doris' speech that she seems to be very good with words and uses a variety of speaking methods in different circumstances. She talks in a very formal and pretentious way when reminiscing of Wilfred; 'Wilfred said he would be prepared to under take the responsibility. ...read more.

This is because of the dramatic device, an unreliable narrator. It keeps the audience aware of whether the character is telling the truth or not as there are no other characters to tell their side of the story. Another advantage of just having one character speaking is that the audience has the opportunity to gain greater insight into the characters personality. In different circumstances I think that a third person would be more effective than a monologue as it might bring more detail and interest into the drama. It would also create more issues for the audiences to relate to and more characters to learn about and comprehend. The use of only one voice restricts Bennett dramatically for two main reasons. He can only describe the story from Doris' point of view and he can only describe what's going on wherever Doris is located. He attempts to overcome both these problems by the use of Doris' reminiscences, which transport the story to other times and places and therefore gives more scope to the monologue. I think that Bennett does this very successfully as he creates an interesting and factual drama that shows his restrictions did not prove to be an impossible problem. As a person who is considerably younger than Doris' character I find it quite difficult to relate to all of the traumatic experiences that she has gone through. I can sympathise with many of the facts that she has revealed to me as part of an audience but I cannot criticise any of the decisions that she has made as I have never been in a position like hers to judge. Although none of my experiences are in common with those of Doris' I can try and imagine the problems that occurred for her and the way she resolved them. I really enjoyed studying this drama and trying to understand emotions, which I have never come across before. I think that Alan Bennett is a good writer who uses his skills to absorb his audience into the drama as it unfolds. By Katie Bradford ...read more.