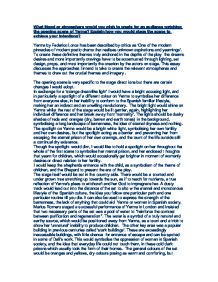 What Mood or atmosphere would you wish to create for an audience watching the opening scene of Yerma? Explain how you would stage the scene to achieve your intentions?

What Mood or atmosphere would you wish to create for an audience watching the opening scene of Yerma? Explain how you would stage the scene to achieve your intentions? Yerma by Federico Lorca has been described by critics as 'One of the modern pinnacles of modern poetic drama that realises unknown aspirations and yearnings'. To create these definitive themes truly anchored in the depths of the play the dreams desires and more importantly cravings have to be accentuated through lighting, set design, props, and most importantly the creation by the actors on stage. This essay discusses the approaches I intend to take to create the relevant atmospheres and themes to draw out the crucial themes and imagery. The opening scene is very specific to the stage directions but there are certain changes I would adopt. In exchange for a 'strange dreamlike light' I would have a bright accusing light, and in particularly a spotlight of a different colour on Yerma to symbolise her difference from everyone else, in her inability to conform to the Spanish familiar lifestyle, making her an indirect and an unwilling revolutionary. The bright light would shine on Yerma whilst the rest of the stage would be lit gentler, again, highlighting her individual difference and her break away from 'normality'. The lights should be dusky shades of reds and oranges (dry, barren and earth tones) ...read more.

The pace would quicken to symbolise that her time was running out, then the whole noise would reach a peak and stop extremely suddenly and abruptly to emphasise Yerma's swift drop back from her subconscious being splayed through her dream, to her desperate reality. I would adapt the song being sung offstage to having a child singing it standing directly in front of her, that she just sees through, as a symbolism of her greatest craving being directly in front of her, perhaps if she was not so faithful to Juan. The mood starts unsteadily and eerily, the expression of Yerma's desire is at one of its peak moments, as her subconscious interferes into her dreams, crossing over from reality. On stage I would have the actress having a reaction to more of a nightmare, sharp, quick tortured movements that disturb her, and display the idea of her craving being so much to the extreme that it is physical pain. The dialogue and mood drops into a domesticated routine between what at first appearances could be misconceived as a happy and considerate partnership between man and wife. As Yerma broaches the subject of children, I would have the lights slightly dimmed and tinted with red as a symbolism of a dangerous subject. I would have Juan turning away, occupying himself with a pointless activity with a mixed expression of misery and anger. ...read more.

At the closing of the scene Yerma repeats a verse from the original song, as Victor has just refreshed her desire for a real family, as her subconscious reacts to Victor's presence. We see Yerma being physically affected by her dazed movements and appearance at the end of the scene, her fixation into space may be her visualising her dream of children and subconsciously, Victor. Throughout the songs the spotlight would brighten, due to the direct links to fertility. The moods are much defined throughout the opening scenes and changes smoothly, with the songs acting as mood shifter so any atmosphere can be created between dialogues. In conclusion the main moods that I would aim to direct across significantly are desperation, unwilling, insanity and jealousy. The clearly defined sectors of the scene allow the use of colour in lighting as a symbol of the particular message being portrayed. The scene has themes firmly indented which need to be portrayed through acting skills in particular, other wise the whole objective and meaning of the play is lost. Lorca was quoted to say "A poet must be a professor of the five bodily senses" and as Yerma has been described as "A tragic poem in three acts and six scenes" I believe Lorca wanted the audience to have to use all their senses too, and for the creation on stage to enable the audience to do that. Abigail Morrish 12A Miss Patterson ...read more.