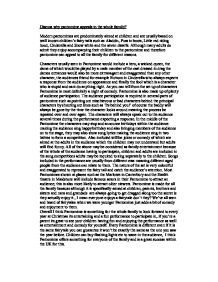 why pantomime appeals to the whole family

Discuss why pantomime appeals to the whole family? Modern pantomimes are predominately aimed at children and are usually based on well known children's fairy tails such as Aladdin, Puss in boots, Little red riding hood, Cinderella and Snow white and the seven dwarfs. Although many adults do admit they enjoy accompanying their children to the pantomime and therefore pantomime can appeal to all the family for different reasons. Characters usually seen in Pantomime would include a hero, a wicked queen, the dame of which would be played by a male member of the cast dressed in drag the dames entrances would also be more extravagant and exaggerated than any other character, the audiences friend for example Buttons in Cinderella who always expects a ...read more.

We've all seen and heard of fairytales when we were younger Pantomime just adds a bit of comedy and enjoyment to them. Overall I think Pantomime is something for the whole family to look forward to every year at Christmas its entertaining and a fun performance to participate in, if you're a parent its great to see your children having fun and enjoying the performance as well as entertainment and comedy for yourself. Every Pantomime is different even if it is the same fairytale you can guarantee it won't be exactly the same as the one you saw the year before. Children can buy flashing lights etc to wave in the audience, I think Pantomime offers something for everyone of the family and is a great success within the UK for this. ...read more.