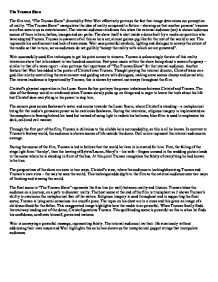 The Truman Show The film text, "The Truman Show" directed by Peter Weir effectively portrays the fact that image determines our perception of reality. "The Truman Show" manipulates the idea of reality compared to fiction - showing us that another persons' traumas are often seen to us as entertainment. The internal audience reinforces this when the external audience (we) is shown ludicrous scenes of them in bars, bathes, lounges and car parks. The show itself is shot inside a dome built by a media corporation who have adopted Truman. Truman is unaware of all this as he is set, almost guinea pig-like for the rest of the world to see. This represents his confinement and lack of awareness. Weir uses powerful symbols, lighting and dialogue to convey the extent of the media so that in turn, we as audiences do not gullibly "accept the reality with which we are presented". ...read more.

The idea of the fantasy world in reinforced when Truman slowly picks up on things and is eager to know the truth about his life but Christof does everything in his power to stop him. The camera pans across Seahaven's water and zooms towards the Lunar Room, where Christof is standing - a metaphorical being for the media's pervasive power as he overlooks Seahaven. During the interview, religious imagery is implemented as the ecosphere is fanning behind his head but instead of using light to radiate his holiness, blue filter is used to emphasize his dark, cold and evil manner. Through the first part of the film, Truman is oblivious to the clich�s he is surrounded by, as this is all he knows. In contrast to Truman's fantasy world, the audience is shown scenes of life outside the dome. ...read more.

between reality and illusion. Truman takes the audience on a journey, on a path to discover reality. The boat scene at the end of the film is triumphant as it shows Truman's ability to overcome the metaphorical fear of the waters. Religious imagery is used throughout and in supporting the final scene, Truman is lying semi-conscious in a crucifix pose. The ropes on his chest are in a cross and this gives an image of a child sacrificed for the father. This exaggerated image highlights how the media is so powerful. When Truman finally finds the stairway leading out of the dome, Christof questions Truman. This spellbinding scene is powerful as this is when he finds his confidence, confronts himself, grows and matures. Weir is conveying a powerful message, representing falsity. The internal audience live their life vicariously without addressing their own issues and Weir highlights this as he has shown us the metaphorical puppet strings that manipulate audiences. ...read more.