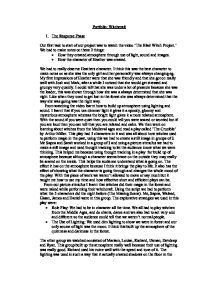 Portfolio: Witchcraft 1. The Response Phase Our first task to start of our project was to watch the video 'The Blair Witch Project.' We had to make notes on these 2 things: * How they created atmosphere through use of light, sound and images. * How the character of Heather was created. We had to really observe Heathers character. I think this was the best character to make notes on as she was the only girl and her personality was always changing eg. My first impressions of Heather were that she was friendly and that she got on really well with Josh and Mark, after a while I noticed that she would get stressed and grumpy very quickly. I could tell that she was under a lot of pressure because she was the leader, this was shown through how she was a always determined that she was right. Like when they used to get lost in the forest she was always determined that the way she was going was the right way. From watching the video learnt how to build up atmosphere using lighting and sound. I learnt that if you use dimmer light it gives it a spooky, gloomy and mysterious atmosphere whereas the bright light gives it a more relaxed atmosphere. With the sound if you were quiet then you could tell you were scared or worried but if you are loud then you can tell that you are relaxed and calm. We then went on learning about witches from the Medieval ages and read a play called 'The Crucible' by Arthur Miller. ...read more.

Our next task was to take a diary entry from Heather's journal and we were told to hot seat each other in pairs. Mariam and I hot seated each other. We then got together as a whole class and hot seated one person from each pair. I was hot seated by the class. We all then had to write a role on the wall of Heather. I learnt a lot about Heathers character. Like how she got on with her friends, why she wanted to do the project. I think learning all this from a hot seat is good because then you know how to portray that character. Like Heathers character would be: Bossy, Grumpy, Careless, Likes to be on top of things, always thinks she's right. Our last task was to show through atmosphere the reaction of the townspeople when they find out about the three missing people. I was in a group with Mariam, Sarah, James, Damien, Salman, Sunil, Christian and Fasil. We decided that we would have a family watching the news and then find out about the missing youngsters. We would have a reaction from an old man a couple (in their early 30's) and 2 little kids. We wanted the different perspectives to show the different reactions of people in the town of different ages like the parents would feel sympathetic and the granddad would be swearing at the TV. and the 2 little kids would be feeling scared. We chose a newscast because this is shocking and serious new and it also gets the message across to the audience at just how serious this really is. ...read more.

This built up atmosphere because it showed the darkness in the forest and showed that they had no source of light left. Also no one else thought of doing this so it made their piece different from everyone else's. Their use of props was good because they had a black curtain on the floor so it looked like the ground of the tent. The emotions in the voice were good but the 3 p's would have made the performance more effective. I think if Waleed used more pitch in his voice you could have made out haw he was feeling easier. He kept his voice the same tone throughout the play. They added another line in the play said by Sunil, which was good because it reminded the audience of other characters sleeping in the background. It made an effect because then we could tell why Waleed had to whisper in the play-but we weren't' allowed to add our own lines! Richard and Ryan The use of sound effects was really good (they managed to find a CD with crickets on it). Because they had crickets in the background to shoe the quietness in the forest. They used good lighting in their performance because they only used a torch for their source of light. This built up the atmosphere and shoed the audience how restricted they were. Richard used his voice really well and used the 3 p's this showed his emotions really well. When he was upset he used go quiet and pause more the tone of his vice would go softer. When he was angry he would talk faster and his pitch would go higher. This group also added their own lines to the script as well! ...read more.