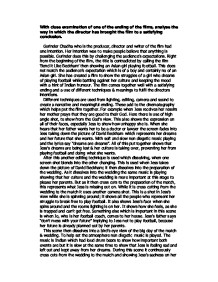 With close examination of one of the ending of the films, analyse the way in which the director has brought the film to a satisfying conclusion.

With close examination of one of the ending of the films, analyse the way in which the director has brought the film to a satisfying conclusion. Gurinder Chadha who is the producer, director and writer of the film had one intention. Her intention was to make people believe that anything is possible. Gurinder does this by challenging the audience's expectations. Right from the beginning of the film, the title is contradicted by calling the film 'Bend it Like Beckham' then showing an Asian girl playing football. This does not match the audience's expectation which is of a boy and certainly no of an Asian girl. She has created a film to show the struggles of a girl who dreams of playing football while battling against her culture and keeping the mood with a hint of Indian humour. The film comes together well with a satisfying ending and a use of different techniques & meanings to fulfil the directors intentions. Different techniques are used from lighting, editing, camera and sound to create a narrative and meaningful ending. These add to the cinematography which helps put the film together. For example when Jess receives her results her mother prays that they are good to their God. Here there is use of high angle shot, to show from the God's view. This also shows the expression on all of their faces, especially Jess to show how unhappy she is. When she hears that her father wants her to be a doctor or lawyer the screen fades into Jess taking down the picture of David Beckham which represents her dreams and her future that she wants. ...read more.

It also shows facial expressions of both of the actors. Here Jules's mother is shown as a stereotype. She is represented as a typical blonde 'bimbo' by the clothes she wears and the attitudes she has towards Jules playing football and what she thinks about her daughter being a lesbian. But then her mood changes when she finds out that her daughter is not a lesbians. She says "there's nothing wrong with being a lesbian." This shows that Jules's mother is portrayed as a dumb blonde who is narrow minded. Although Jess is totally oblivious to what Jules's mother is thinking. This is shown by the camera when a close up shot of her face is done. Jess tries to push it to aside while her typical Indian family haven't got a clue to what is happening. Back at the house there is a tense atmosphere of the voices of her family, as Jess still has not broken the news about America to her parents. Jess and her friend Tony talk secretly. There is use of a close up shot between them to show their secrecy and the private conversation. It shows how close they are in friendship. Tony is shown totally different from the other characters. He accepts Jess for who she is, just like she does for him. He is not shown as a stereotype and believes in her, this is what challenges the audience's expectations. Therefore Tony lies for Jess so she can go to America. This shows that he will do anything as he cares for her. ...read more.

The role of Jess's family is a stereotype. The parents of the family must get the children married off and learn them all the Indian traditions. They must have certain jobs which pays them a lot. But this vision is blurred when things go Jess's way and her dream is becoming true. Which is also adds to the directors intentions. As 'Bend it Like Beckham' is set in west London, Southall this is mostly an Asian place and shows what Jess has to live up to. As the place is a typical Asian area, Jess had to stick to their customs and this is what her parents want. But the fact that it is set in the 21st century makes the situation different. This shows that Jess doesn't want to stick to traditions but to change so she can fulfil her dream. Again this is another point to add to make the directors intentions. Going back to the director intentions, this was to make a film to show to people that anything is possible. It doesn't matter who you are but you can make your dreams come true, if you have the determination and no matter what problems you may come across just keep trying. This is what Gurinder wanted the audience to learn from the film. This is how she made film come to a satisfying conclusion. By the cinematography, the way the characters are represented and the perspective of the film and characters. And all of this is what helps put the film together and help get the directors intentions and message across to the audience. ?? ?? ?? ?? ...read more.