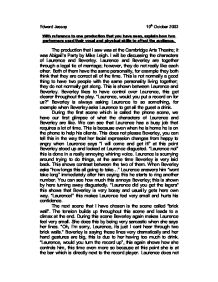 With reference to one production that you have seen, explain how two performers used their vocal and physical skills to affect the audience.

Edward Jessop 19th October 2003 With reference to one production that you have seen, explain how two performers used their vocal and physical skills to affect the audience. The production that I saw was at the Cambridge Arts Theatre; it was Abigail's Party by Mike Leigh. I will be discussing the characters of Laurence and Beverley. Laurence and Beverley are together through a legal tie of marriage; however, they do not really like each other. Both of them have the same personality, for example they both think that they are correct all of the time. This is not normally a good thing to have two people with the same personality living together; they do not normally get along. This is shown between Laurence and Beverley. Beverley likes to have control over Laurence, this get clearer throughout the play. "Laurence, would you put a record on for us?" Beverley is always asking Laurence to so something, for example when Beverley asks Laurence to get all the guest a drink. ...read more.

During this scene Beverley again makes Laurence feel very small. She does this by being very sarcastic when she says her lines. "Oh, I'm sorry, Laurence, its just I cant hear through two brick walls." Beverley is saying these lines very dramatically and her hand gestures are big, this is due to her having too much to drink. "Laurence, would you turn the record up", this again shows how she controls him, this time even more so because at this point she is at the bar which is directly next to the record player. Laurence does not want to because he is trying to talk to the other guest. This is what he says but he really doesn't like the music that she is trying to play. This section also shows the contrast in tastes in music; neither of them likes the others music. They continue to argue about it and throughout the tension is getting more intense until Laurence grabs here arm. ...read more.

He mostly sat on the sofa or just behind it getting drinks, this was in centre stage. He ventures into the kitchen sometimes to get some beer or to make himself a sandwich, this shows that once he comes back from work he just wants to relax but he can't because of his nagging wife. Beverley's costume shows that she is a woman who likes to show of herself and her money off. Laurence is wearing a work suite; this shows that he does a lot of work. Both costumes are very ugly, but that is because of the 1970's setting. The tension built up between Laurence and Beverley slowly and gradually throughout the play, this lead to Laurence's to death through worrying too much about his marriage. Throughout the play Laurence became a lot more agitated, this was mainly to do with Beverley and also Tony to some extent. Beverly became a lot more attracted to Tony as the performance went on thus increasing Laurence's anger. Beverly stayed about the same throughout the play; this was a very annoying character. ...read more.