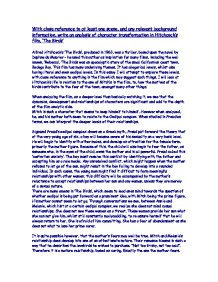 Withclose reference to at least one scene, and any relevant background information,write an analysis of character transformation in Hitchcock's film, 'The Birds'

With close reference to at least one scene, and any relevant background information, write an analysis of character transformation in Hitchcock's film, 'The Birds' Alfred Hitchcock's 'The Birds', produced in 1963, was a thriller, based upon the novel by Daphne du Maurier - he used this author as inspiration for many films, including the well known, 'Rebecca'. 'The Birds was an apocalyptic story of the small Californian coast town, Bodega Bay. This film has many underlying themes. It has allegorical levels, whilst also having literal and even oedipal levels. In this essay I will attempt to explore these levels, with close reference to anything in the film which may suggest such things. I will look at Hitchcock's life in relation to the one of Mitch's in the film, to, how the motives of the birds contribute to the fear of the town, amongst many other things. When analyzing the film, on a deeper level than basically watching it, we see that the dynamics, development and relationships of characters are significant and add to the depth of the film analytic side. Mitch is such a character that seems to keep himself to himself. However when analyzed, he, and his mother both seem to relate to the Oedipal complex. When studied in Freudian terms, we can interpret the deeper levels of their relationships. Sigmund Freud's oedipal complex draws on a Greek myth, Freud put forward the theory that at the very young age of six, a boy will become aware of his sexuality on a very basic level. He will begin to identify with other males, and develop an attraction for the female form, primarily the mother figure. ...read more.

Mitch's younger sister Cathy addresses Melanie as Melanie, where as, towards the beginning, the mother is still addressing her as Miss Daniels. The rest of the family is accepting Melanie; they are treating her as a friend, asking her to stay. The mother remains still rather hostile towards her, however this hostility is not affecting Melanie, and there are no noticeable camera angles which suggest who is of a higher status than whom. Melanie does, later in the scene, notice the hostility felt towards her, but purposely overlooks it for her own good. Melanie says that she should stay, before the mother has a chance to interject. She uses an authoritative tone with a rhetorical statement, and glances at the mother as she says it. She is her own person and does not need reassurance from anyone else, for her own decisions. In contrast to this, when the mother speaks she does seek reassurance. She looks towards Mitch for justification. When the first bird attacks that night, it is Melanie who sees it first. We see the bird through a subjective shot through Melanie. This shows she is the one who is alert and will take control. She is beginning to broaden in her motherly character already. The mother's status begins to deteriorate from here onwards. There is use of high angles to make the mother's role appear lower than Melanie's. Melanie seems to remain calm throughout the attack. We see the exit, the escape route, through a subjective through Melanie, this shows she is always thinking, not panicking like the mother, and she has the family best interests in mind. These are very motherly actions, perhaps unlike what may have been expected of her in relation to what we find at the beginning concerning fountains in Italy. ...read more.

Melanie is looking up at the mother, the mother is looking down; as it was in the beginning. Melanie's relationship with the locals is far from a desired one. The locals seem to link her to the attacks of the birds more and more as the film progresses. When they first encounter her in the caf�, although none appear to have spoken to her, they are still extremely skeptical towards her. As the film progresses the skeptical nature of the locals does not lessen or go away, if anything it deepens. In the scene where the birds attack the petrol station, the idea of the cynic among the locals is confirmed. The remaining people in the caf� bar, including Melanie, are distraught, panicked and terrified. Another typical Hitchcockian woman confronts Melanie, telling her how all the trouble with the birds is Melanie's fault, and that everything was fine until she came along. She tells her to go back to where she came from. At this point Melanie slaps the woman, consequently provoking all opinions held of her by the locals, to reach the lowest point possible. Having analyzed the transformation of characters in depth, I believe that the transformation of the characters' of Melanie and the Mother are the greatest. Without these changes, the film would not have such a level of suspense and audience empathy. I feel the way that Hitchcock allows the audience to travel through Melanie's transformation with her, increases the amount of empathy felt towards her. We know what she has been through, and hope where she is going will make her happy. We also feel that the end scene, which acts as an equalizer, is a hint of what is to happen in the future. Therefore, character transformation is a vital feature concerning the film succeeding on a range of levels. ...read more.