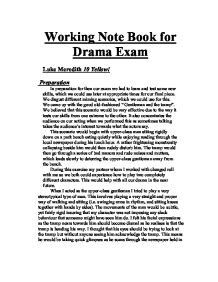 Working Note Book for Drama Exam Luke Meredith 10 Yellow! Preparation In preparation for then our exam we had to learn and test some new skills, which we could use later at appropriate times for our final piece. We disgust different miming scenarios, which we could use for this. We came up with the good old-fashioned " Gentleman and the tramp". We believed that this scenario would be very effective due to the way it tests our skills from one extreme to the other. It also concentrates the audience on our acting when we performed this as sometimes talking takes the audience's interest towards what the actors say. This scenario would begin with upper-class man sitting rigidly down on a park bench eating quietly while enjoying reading through the local newspaper during his lunch hour. A rather frightening monstrosity collapsing beside him would then rudely disturb him. The tramp would then go through a series of bad manors and rude noises and mutters, which leads slowly to deterring the upper-class gentleman away from the bench. During this exercise my partner whom I worked with changed roll with me so we both could experience how to play two completely different characters. This would help with all our drama in the near future. ...read more.

So from this we knew that we at least have four scenes to conjure up. Then we decided that we needed something not only to link the scenes but also to introduce the show and to finish it. This involved seven scenes with us missing a few links between the major four scenes. The order we followed was introduction, first characters scene, second characters scene, and third characters scene, link scene in Purgatory, fourth characters scene and final scene. We didn't always have link scene because other wise it would have taken to long and repetitive. To still link scenes one to two and two to three we gave little introductions at the begging of each major scene. From the tittles, which we were given by our teacher, we choose "Appearance and Reality". This was because in our first scene one character did not know if he was in reality even though it gave an image of it. The time we were given at the very beginning was twenty five to thirty minutes even though later we were given an extension for up to about fifty minutes. These things were really the basis of how we started our final show. Now we had these out of the way decided to take each scene as it comes in the order and work through them. ...read more.

This hardly caused any problem at all as it was very easy to recover from. The only thing I thought went drastically wrong was the lighting this was because the people who were doing the lights did not use the guidelines we prepared for them. This meant that after we said the last in a scene, the lights did not go off, which forced to improvise and walk off stage as if we had rehearsed it. My opinion of this mistake, made the performance loose its slightly more professional look, which I certainly would off liked. I also believe the lighting was like a finishing touch to a fairly good performance. I believed that if we had also rehearsed much more, then maybe we would have lost silly mistakes like occasionally not looking at the audience, or a slight chuckle when someone did something wrong, any timing off arriving and departing from the stage. All together I would come to the conclusion that the acting was at a good standard and with more rehearsals and better lighting staff, we could have made it a very good comical show. On my performance individually, I believe it went fairly well. From my point of view, the character I played, did not rally have a big enough role for the high grade I am looking at. This would then be one of my downfalls. ...read more.