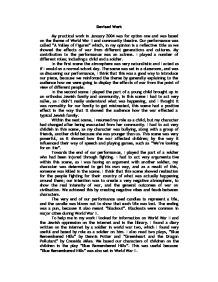 Devised Work My practical work in January 2004 was for option one and was based on the theme of World War II and community theatre. Our performance was called "A Valley of Figures" which, in my opinion is a reflective title as we showed the effects of war from different generations and cultures. My contribution to the performance was an actress. I played a number of different roles; including a child and a soldier. In the first scene the atmosphere was very naturalistic and I acted as if I would on a normal school day. The scene was set in a classroom, and was us discussing our performance, I think that this was a good way to introduce our piece, because we reinforced the theme by generally explaining to the audience how we were going to display the effects of war from the point of view of different people. In the second scene I played the part of a young child brought up in an orthodox Jewish family and community, in this scene I had to act very na�ve, as I didn't really understand what was happening, and I thought it was normality for our family to get mistreated, this scene had a positive effect in the way that it showed the audience how the war effected a typical Jewish family. Within the next scene, I resumed my role as a child, but my character had changed after being evacuated from her community. ...read more.

The characters who appear in our production are mainly upper-middle class; for example, the Jewish family had a Rabbi within the family, who is a well respected figure within a Jewish community. Within our piece, there was some contrast in the status and class of certain characters, such as the children, and the soldiers. The contrast in status was shown by the way the character with the higher status would talk more confidently and had a more superior tone of voice, For example to younger child being bullied, and the injured soldier being mistreated by the general. In contrast, "Greenheart and the Dragon Pollutant" has 'fairytale' characters such as a dragon and no real changes in status were shown, with the exception of 'Greenheart' being the hero. In my opinion, the audience don't really get a chance to become involved with the characters in "Greenheart and the Dragon Pollutant" as they have no names, and are just known by titles, as I discussed earlier. In our play, we used a number of different cultures, including a Jewish Culture, Fascism and Nazism, a young generation (children) and the rivalry between soldiers. We used many different cultures to describe the war from different people's eyes. Our characters were distinguishable by different tone of voice and different costume. We chose to perform in a naturalistic style, with some non-natural techniques so our piece would involve a range of different skills, such as monologues, face outs, thoughts in the head and using poetry and music to create the right atmosphere. ...read more.

During the Holocaust six million Jews were murdered. Hitler once remarked 'If the Jews didn't exist, we would have to invent them'. This is one of his most revealing comments on Nazism. Nothing creates more unity than a common enemy. The hatred of the Jews was the backbone of Hitler's power. Hitler: 'The struggle between the people and the hatred amongst them is being nurtured by very specific interested parties ...' This was the first speech that Hitler broadcast live on all German radio stations, and took place only nine months after his take-over as Chancellor of the German Reich. It is a perfect illustration of the way he was able to create a sense of community between himself and his audience. Hitler was aware that many in this working-class audience were likely to have left-wing sympathies, yet within a minute he had won them over with a reference to his wartime service as a corporal in the trenches. The chief aim of the speech was to promote rearmament, without regard for international restrictions. Hitler wanted Germany to leave the League of Nations, which opposed rearmament; in November 1933 he organised a national plebiscite, in which Germans were intimidated into agreeing that they too wanted rearmament. This was obviously going to damage Germany's international position, but Hitler made it clear whom he intended to blame. In the speech at the Siemens Dynamo Works, he never actually mentioned the Jews, but it was quite clear to whom he was referring. It hardly needed the man in the audience to shout it out. Resources: "Ten Short Plays" - Various authors/playwrights "Blue Remembered Hills" - Dennis Potter http://www.bbc.co.uk/history/war/ ...read more.