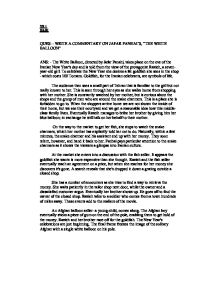 YR 1 HARI QUES: - WRITE A COMMENTARY ON JAFAR PANHAI'S, "THE WHITE BALLOON" ANS: - The White Balloon, directed by Jafar Panahi, takes place on the eve of the Iranian New Year's day and is told from the view of the protagonist Razieh, a seven-year-old girl. To celebrate the New Year she desires a fat goldfish she sees in the shop - which costs 100 Tomans. Goldfish, for the Iranian celebrants, are symbols of life. The audience then sees a small part of Tehran that is familiar to the girl but not really known to her. This is seen through her eyes as she walks home from shopping with her mother. She is constantly watched by her mother, but is curious about the shops and the group of men who are around the snake charmers. This is a place she is forbidden to go to. When the shoppers arrive home we are not shown the inside of their home, but we see their courtyard and we get a reasonable idea how this middle-class family lives. Eventually Razeih manages to bribe her brother by giving him her blue balloon; in exchange he will talk on her behalf to their mother. ...read more.

This is further achieved by Panhai's use of noise in the background. This is used a lot by Panhai throughout the film. Traffic noises, radio talk shows blasting out from hidden "boom boxes" and off screen voice especially the unseen father inside the house, yelling at the other family members help create the realistic atmosphere that Panhai is aiming to create of real life in Tehran- be it on the streets or at home. What strikes the audience above all is the intellectual and visual clarity of Tehran life. The White Balloon gives "Western" viewers a rare glimpse into the real Iran. Here, freed of political shading, we meet the genuine inhabitants of Tehran, and, unsurprisingly, find that they're not all that different from us. The audiences' impressions of other characters are filtered through Razieh, so we see them as she does, whether they're strange, frightening, indifferent, or helpful. All the faces of humanity are represented, from a generous-but-ineffectual old woman to a sinister soldier who tells lies to gain the young girl's confidence. I think Panhai through this is showing how a child is forced to grow up when faced with adversity. ...read more.

And later she says, "I wanted to see what it was that was not good for me to watch." Razieh does this, because she has the courage to do it. The confrontation between the little girl and the snake charmers, are suggestive and convincing of a regime where so much is forbidden-particularly to females. The audience sees the rebellious nature of the women in Iran represented in Razieh. The final shot is of the Afghan boy, smiling just seconds ago, now saddened, and alone with just one white balloon that he did not sell. The shot is powerful as the film ends with our impression of him lingering in our minds. The little girl's adventure seems to be just one little story told; and, now, we can easily forget about her. But the Afghan's loneliness remains etched in our mind, as it affects the sensibilities we have about family life and makes us reflect what it is to be a foreigner in a country where family life is so cherished. It leaves the audience thinking not about any of the celebrants but about what is going to happen to him, how will he celebrate the New Year. Furthermore it is a reminder that there is always a person who needs a helping hand. ...................................................................................... ...read more.