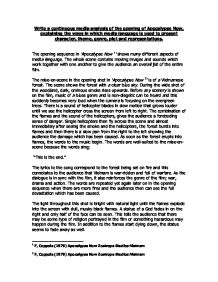 Write a continuous media analysis of the opening of Apocalypse Now, explaining the ways in which media language is used to present character, theme, genre, plot and representations.

Write a continuous media analysis of the opening of Apocalypse Now, explaining the ways in which media language is used to present character, theme, genre, plot and representations. The opening sequence in 'Apocalypse Now 1' shows many different aspects of media language. The whole scene contains moving images and sounds which work together with one another to give the audience an overall jist of the entire film. The mise-en-scene in the opening shot in 'Apocalypse Now 2' is of a Vietnamese forest. The scene shows the forest with a clear blue sky. During the wide shot of the woodland, dark, ominous smoke rises upwards. Before any scenery is shown on the film, music of a blues genre and is non-diegetic can be heard and this suddenly becomes very loud when the camera is focusing on the evergreen trees. There is a sound of helicopter blades in slow motion that grows louder until we see the helicopter cross the screen from left to right. ...read more.

This provides us a low chopper sound. This, again, gives the audience an apprehension of the difficulty that is yet to come. The facial expressions on the soldier demonstrate to the audience that he is worried and anxious. He is lying in bed and he seems to give the audience the impression that he is troubled by the activities occurring around him. The audience feel as though what they are observing, are the thoughts that the soldier is experiencing. As the soldier is reclining on his bed, he is looking upwards and experiencing a compilation of thoughts and feelings which the audience then observe. The montage continues and you then see various articles in the vicinity around him. These include pictures and letters on a table, cigarettes and a lighter, alcohol, and a gun under his pillow. All these items present the audience with the type of person the soldier is and they are displayed on screen by a slow pan from left to right. These objects tell the audience that this man is a soldier, who seeks solace whilst fighting for his country. ...read more.

To conclude, the opening sequence in "Apocalypse Now 3" uses a combination of different interpretations of media language. The lighting throughout is natural apart from the gloomy, dark smoke which shows the audience that the film will be based outside for most part of the film. The different camera angles portray the film for the genre that it is; a drama with action. The props in the film reinforce that the motion picture will be full of conflict and battle; the gun, alcohol and letters signify to the audience that confrontation will be intoxicating with elements of excitement. The soundtrack in the opening of "Apocalypse Now 4" is very important to the representation of media language as its blend of visualization and sound combines to give an overall effect. With the use of the dialogue within the song, the audience can be given an interpretation of the entire film through just very brief introduction. The representation given to the audience about American soldiers in Vietnam are that they are men who are going into combat with little or no wish to be involved and do not desire to be placed where they are. ...read more.