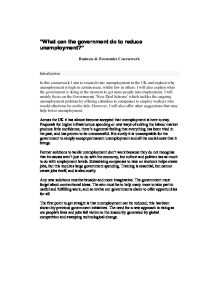 "What can the government do to reduce unemployment?" Business & Economics Coursework Introduction In this coursework I aim to research into unemployment in the UK and explain why unemployment is high in certain areas, whilst low in others. I will also explain what the government is doing at the moment to get more people into employment. I will mainly focus on the Governments 'New Deal Scheme' which tackles the ongoing unemployment problem by offering subsidies to companies to employ workers who would otherwise be on the dole. However, I will also offer other suggestions that may help lower unemployment. Across the UK it has almost become accepted that unemployment is here to stay. Proposals for higher infrastructure spending or new ways of editing the labour market produce little confidence, there's a general feeling that everything has been tried in the past, and has proven to be unsuccessful. But surely it is unacceptable for the government to simply accept permanent unemployment and all the social costs that it brings. Former solutions to tackle unemployment don't work because they do not recognise that its causes aren't just to do with the economy, but culture and politics has as much to do with employment levels. Subsidising companies to take on workers helps create jobs, but this requires large government spending. ...read more.

This way, everyone seems to benefit - not only individuals, but also the communities in which they live and the businesses in which they work. Rising Unemployment The first step for the government to take before considering reducing unemployment is to make sure the levels don't rise anymore- and recent news will not please them. It would seem that for the first time in over eight years, unemployment could be on an upward trend. The spate of high profile job losses finally seems to be making its presence felt in the dole queue. The number of people claming benefit rose by over 4,000 in October. That jobless count can, however, be misleading, as it depends on people being able to comply with the (increasingly stringent) criteria for receiving benefit. Even the government admits that an alternative and wider measure - known as the ILO one - is more reliable. That is based on a survey of households, and classes someone as unemployed if he or she is available for work, and has looked for a job in recent weeks. It also shows unemployment has risen over recent months, by an average of 10,000 per month. Job losses are of course nothing new in manufacturing. The recession-hit sector has been shedding workers for the last few years, and has lost over 300,000 jobs in the last two years. ...read more.

They were counted in the ILO survey, but come under the term "economically inactive", not unemployed, as they were not seeking or available for work. Whatever the true picture, economists think the number of those out of work will rise, perhaps by about a quarter of a million or so in the next year. While clearly, this would be very bad news for those directly affected; it would be a small rise by the standards of previous downturns. The number of people in work would still be close to 28 million. And unemployment would still be among the lowest in Europe. Such a rise would be consistent with the idea that the UK is in for a slowdown rather than recession. But it is at the point when unemployment is rising that the risk of a sharper slowdown for the economy may occur. As the job losses intensify, even those still in employment start to worry about their prospects - and tighten their belts. Because consumer spending is keeping the economy afloat, the impact of unemployment figures could be crucial for the continued growth of the UK economy. ONS figures 4,300 claimants in Oct- 1st increase since Oct 2000 Unemployment rate 2.3% Unemployment has been falling since 1992 to 26 year low Experience of Unemployment - Economic Journal research Long -term 'scars' Increased likelihood of future unemployment Lower subsequent earnings Redundancy ranks only behind bereavement & divorce social exclusion ...read more.