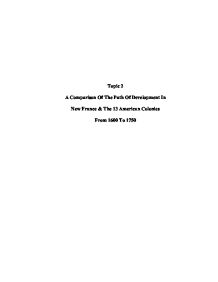 A Comparison Of The Path Of Development In

Topic 2 A Comparison Of The Path Of Development In New France & The 13 American Colonies From 1600 To 1750 The path of development in New France and in the 13 colonies was quite dissimilar resulting in extremely different rates of growth. Cod fishing led to contact with the land of New France while fur dominated the trade throughout the period of occupation by France and led to the growth of the economy. In contrast, the thirteen colonies were quite diversified in the staples trade: tobacco, rice, indigo and timber in the form of ships being some of the major ones. The following paragraphs will attempt to explain the divergence in growth rates experienced in the period 1600 to 1750 in the two geographical areas. John Cabot was the first Englishman to find the great numbers of fish off the coast of Newfoundland. He went back with this discovery and returned the following year with many fishermen to exploit this natural resource. Hence, men came to what would soon be called 'New France', with the objective of catching and taking back fish to sell in their mother country or foreign markets not with the view to explore or settle in the 'New World'. Contact with land was accidental and arose out of the need to use the dry cure method to preserve fish. In this method fish were gutted, lightly salted and laid out in the sun to dry. This method was superior to the green cure method because it required less salt which was difficult to obtain and also resulted in better food quality of the fish. Fish was also preserved for a longer time period in this method, which meant that the fishermen could export the fish to far-away markets. Hence, as more fishermen started using the dry cure method, contact with land became inevitable. It is hypothesized by some that the first settlers were indeed fishermen who stayed back in order to lay claim to the best fishing grounds. ...read more.

This view led to the accumulation of gold and silver, either through pillaging of new lands or through a favorable trade balance. Imports were thought to be 'bad' while exports were thought to be 'good'. Colonies provide an alternative to importing goods from foreign sources. An ideal colony was though to be one which was different from the mother country in terms of resources. As a result it would provide a ready market for goods from the mother country and also erase the need of the mother country to import goods from foreigners. Thus, Britons went to the thirteen colonies in pursuit of profits derived from developing an ideal colony that would fit into the mercantile system. The products that resulted out of the colonies were those that thrived in the unique prevalent climate, the nature of the land and proximity to water. They were those that could be produced efficiently and in sufficient quantities for export. The view was to pay for the necessary imports with specie obtained from the exports. Each region had different production possibilities. The colonies were divided into three major economic areas: the South, the Middle Colonies, and New England.5 The south eventually specialized in rice and indigo and tobacco while the Middle colonies specialized in grain, livestock; they also had collection centers for the goods from the interior. The third area, New England specialized in fishing, whaling, shipping and ship building. The first company that tried to establish itself in the South was a crown chartered joint stock company called the 'London Company' n 1607. The majority of the first few settlers died from disease, misadventure and starvation as conditions were harsh.6 Eventually, it was discovered that tobacco thrived in such conditions and plans were drawn to grow this product. Tobacco was relatively easy to plant but depleted the soil of minerals fairly quickly; it required new land periodically for cultivation. Hence, although land was seemingly unlimited, it needed labour to get it cleared and plant the seeds. ...read more.

In order to pursue colonialization, companies were forced to use profits derived from the fur trade to bring settlers over and subsidize them until they became self-sufficient. Trade and colonialization were two opposing objectives for the colonies because of the intrinsic features of fur which dominated the trade. The fur trade did not require many Europeans as Native Indians were used to trap the fur-coated animals. Europeans were largely just needed to negotiate terms on which French goods were traded for the fur pelts. Another hypothesis about the reason behind the divergence in growth rates between New France and the thirteen colonies is also related to the climate. The climate and nature of the land in the thirteen colonies made the growth of many of the staples easily possible: all that was required for growth was in fact, colonialization. In contrast, the nature of the land and climate in New France made the existence and growth of a diversified staples trade extremely difficult for the settlers. The only staple that could be obtained easily from this colony was fur, agricultural activities were quite difficult to pursue because of soil quality and harsh winters. In addition, the high returns that were possible as a result of fur trading deterred people from working hard to diversify into trade of another staple. In addition there were a lot of factors which deterred the population from actually arriving and settling in New France. Some of these are that the Europeans found the climate uncomfortable, there was an existing threat from Indians and there was barely any support from the companies or the French government. Most of these factors did not exist in the thirteen colonies. In conclusion, the geographical structure of New France and the thirteen colonies was responsible for the divergence in growth rates. It is unfair to compare the rates as the regions dissimilar and could not produce the same growth rates due to this reason. ...read more.