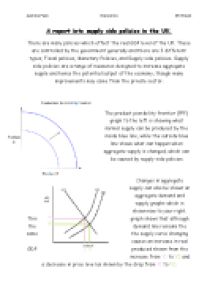 A report into supply side policies in the UK.

﻿Jasmine Peek Economics Mr Brown A report into supply side policies in the UK. There are many policies which effect the real GDP level of the UK. These are controlled by the government generally and there are 3 different types; Fiscal policies, Monetary Policies, and Supply side policies. Supply side policies are a range of measures designed to increase aggregate supple and hence the potential output of the economy, though many improvements may come from the private sector. The product possibility frontier (PPF) graph to the left is showing what normal supply can be produced by the inside blue line, while the outside blue line shows what can happen when aggregate supply is changed, which can be caused by supply side policies. Changes in aggregate supply can also be shown on aggregate demand and supply graphs which is shown now to your right. This graph shows that although the demand line remains the same the supply curve changing causes an increase in real GDP produced shown from the increase from Y1 to Y2 and a decrease in price level as shown by the drop from P1 to P2. ...read more.

Benefits. Benefits, which were briefly touched upon above, could by itself be used as a supply side policy. This is because if benefits were cut and harder to receive people would have more incentives to work. As before, if people have more incentives to work, the frictionally unemployed become more available as well as increasing the number of people willing to work. These increase of numbers would result in more job vacancies being filled causing an increase in aggregate supply. A drawback of this is that people could easily slip below the poverty line making the UK seem like a worse place to be living, which would deter people from coming here. That being said, it will be the persons choice and because of the incentives to get into work not many people would choose to fall below the poverty line. The product market. With all products being within a market, if the government allows more competitors, this means that the companies producing the products have to become more efficient. ...read more.

training the unemployed as it is a long term investment which provides income for the government in the long run in the form of taxation and because it is just using resources that are otherwise wasted. Although the other policies, the product market and privatisation were very good for increasing aggregate supply, I feel that they would be less successful as the taxation and training as they would make short and long term gains whereas the product market and privatising a business would take time and just be a long term gain. All of the previously mentioned policies would have the impact of pushing the production possibility frontier outwards making more products available for increased demand caused by the increase of available income people have to spend which is shown in the PPF diagram. as well increasing the PPF it would also increase aggregate supply which leads to the decrease in price level and increase in real GDP produced which is shown in the aggregate demand and supply diagram. ...read more.