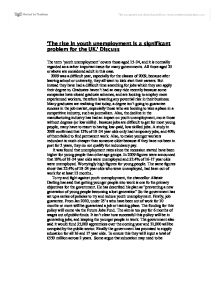 The rise in youth unemployment is a significant problem for the UK. Discuss

'The rise in youth unemployment is a significant problem for the UK.' Discuss The term 'youth unemployment' covers those aged 15-24, and it is normally regarded as a rather important issue for many governments. All those aged 25 or above are considered adult in this case. 2009 was a difficult year, especially for the classes of 2009, because after leaving school or university, they all want to kick start their careers. But instead they have had a difficult time searching for jobs which they can apply their degree to. Graduates haven't had an easy ride recently because some companies have closed graduate schemes, and are looking to employ more experienced workers, therefore lowering any potential risk in their business. ...read more.

The funding for this policy will come via the Future Jobs Fund. The aim is too pay for 6 months of wages out of public funds. It isn't clear how successful this policy will be in generating jobs, and keeping the younger people in work. The government also said it would fund 35,000 apprentices over the coming year and 21,000 will be occupied by the public sector. Finally the government has promised to supply education for all 16 and 17 year olds. To ensure this they will input a total of �550 million across 2 years. Some argue that education may need to be required for those above the age of 17, so the government may expand further education in universities across the UK. ...read more.