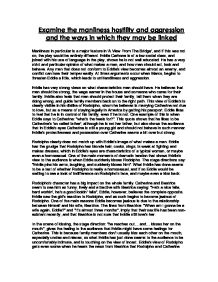 Examine the manliness hostility and aggression and the ways in which they may be linked Manliness in particular is a major feature in 'A View From The Bridge', and if this was not so, the play would be entirely different. Eddie Carbone is of a low social class, and joined with his use of language in the play, shows he is not well educated. He has a very strict and particular opinion of what makes a man, and how men should act, look and behave. Any man that does not conform to Eddie's view becomes almost an enemy, and conflict can lose their temper easily. At times arguments occur when Marco, begins to threaten Eddie a little, which leads to unfriendliness and aggression. Eddie has very strong views on what characteristics men should have. He believes that men should be strong, the wage earner in the house and someone who cares for their family. Eddie also feels that men should protect their family, tell them when they are doing wrong, and guide family members back on to the right path. This view of Eddie's is clearly visible in his dislike of Rodolpho, whom he believes is marrying Catherine not due to love, but as a means of staying legally in America by getting his passport. ...read more.

The fact that Marco, Rodolpho's stronger brother, suddenly rises, coupled with what Catherine does: "(rushing to Rodolpho): Eddie!", shows that everyone in the room was taken aback by what Eddie had done and that Eddie obviously took things one step too far. Eddie tries to make out that he did nothing intentionally wrong and he accidentally punched Rodolpho too hard, by saying: "I didn't hurt him. Did I hurt you, kid?"; but really everyone in the room, and the audience knows that Eddie intentionally did it. The audience can also see the reason why Eddie might have done such a thing, with him feeling threatened and jealous of Rodolpho, he was trying to get back at him. Eddie responding to this situation with physical aggression shows he has difficulty expressing his feelings in any other manner, which may be due to his background and lack of education. Eddie was telling Rodolpho that he is boss of the house and his family members. Rodolpho tries to shrug the whole situation off by saying: No, no, he didn't hurt me...I was only surprised", and by asking Catherine to dance he changes the mood in the room away from aggression and dramatic tension. Marco, Rodolpho's brother, on the other hand, has the qualities which in Eddie's view, belong to a 'real man'. ...read more.

Beatrice and Catherine could also have lessened the amount of hostility and aggression by persuading Eddie not to go ahead with such things as the boxing and the climatic fight to the death at the end of the play. In all, everyone had a role to play in the hostility and aggression in 'A View From The Bridge'. As Beatrice rightly said: "Whatever happened we all done it, and don't you ever forget it, Catherine". In conclusion, Arthur Miller's words and stage directions work together to enhance the dramatic affect of the play and in particular the themes of manliness, hostility and aggression. Every character in the story has contributed their own part to make the manliness, hostility and aggression such a major focus of the play. Most of the hostility and conflict is caused by Eddie, who has fixed views on manliness and has difficulty expressing his feelings due to his lack of education. Eddie's reaction to hostile and threatening situations often leads to verbal and physical aggression and violence, as this is his only known way to deal with such situations. It is because of this that aggression is such a critical factor in the play. Importantly if none of this had happened, their never would have been so much anger, love, and in the end, death. ...read more.