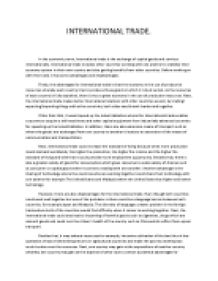 Advantages and Disadvantages of International Trade

﻿INTERNATIONAL TRADE. In the economics term, International trade is the exchange of capital goods and services internationally. International trade includes other countries working with one another to stabilize their economy system in their own country and also getting benefits from other countries. Before working on with this trade, it has some advantages and disadvantages. Firstly, the advantages for international trade is that the economy in the use of productive resources whereby each country tries to produce those goods in which it is best suited. As the resources of each country is fully exploited, there is thus a great economy in the use of productive resources. ...read more.

Besides that, there is also a greater variety of goods for consumption which gives consumers a wide variety of choices such as consumer or capital goods when it comes to trading with one another. Another advantage is the sharing of technology where the countries who are working together could share their technology with one another for example The United States and Malaysia where the United States has higher and better technology. However, there are also disadvantages for the international trade. Even though both countries could work well together but one of the problems is there could be a language barrier between both countries, for example Japan and Malaysia. ...read more.

In addition, when there is a time of emergency in any of the countries such as war and the country which specializes in the production of those commodities in which it has comparative advantage over other countries and the country may not be able to get essential supplies thus the whole economy may be crippled. Other than that, it may lead towards a long distance trade, sometimes international trade may be difficult to maintain the close relationship between the seller and buyer because of the long distance between both countries. In conclusion, international trade maybe useful at most times but has disadvantages at the same time as well. However, international trade is still widely used by all countries in the world because most countries need to depend on one another to get the things they want. ...read more.