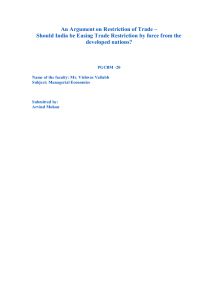 An Argument on Restriction of Trade Should India be Easing Trade Restriction by force from the developed nations?

Recently, the United States attacked India's trade policy criticizing its barriers to agricultural imports and retail sector investment and warned that India may not have shaken off the red tape and trade restrictions that have long plagued foreign business.

Trade barriers by other Countries

In the wake of the strong hypothetical case that has evolved for free international trade, almost all the country in the world has put up at least some barriers to trade. Trade restrictions are typically embarked on in an effort to protect companies and workers in the home economy from competition by foreign firms. Aprotectionist policyis one in which a country restricts the importation of goods and services produced in foreign countries.

The Impact of Protectionist Policies 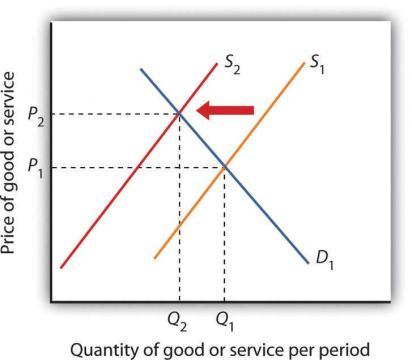 Protectionist policies reduce the quantities of foreign good and services supplied to the country that imposes the restriction. As a result, such policies shift the supply curve to the left for the good or service whose imports are restricted. In the above figure, the supply curve shifts toS2, the equilibrium price rises toP2, and the equilibrium quantity falls toQ2. In general, this policy imposed for a particular good always reduce its supply, raise its price, and reduce the equilibrium quantity, Protection often takes the form of an import tax or a limit on the amount that can be imported, but it can also come in the form of voluntary export restrictions and other barriers.

Developed countries like the US who tend to champion the cause of free trade but their own trade policies have been turning highly protectionist over the past decade. If American companies import something more from India, it is because that they find it cheaper to import from India. Otherwise, they can source the item from somewhere else. If this leads to a trade surplus for India, it is no reason to change the country’s trade policies.

Besides, the US argument on trade liberalization lacks conviction, given its own recent actions — antidumping duties on steel and legislations banning business process outsourcing. While tutoring the virtues of free trade and multilateralism to developing countries, they themselves are creating strong regional trading blocs bound by common external tariffs and strong rules of origin such as the North American Free Trade Agreement (NAFTA) and now Free Trade Area of the Americas (FTAA).

Accounting for more than 60 per cent of world trade carried out on a preferential basis now, these trade blocs are diverting trade and investments away from the developing countries. In general, the average tariffs and other trade barriers are low in industrialized countries. However, their tariffs and trade barriers remain much higher on many products exported by developing countries. A startling example is the fact that tariffs collected by the US on $ 2 billion worth of imports from Bangladesh are higher than those imposed on imports worth $ 30 billon from France.

In order to facilitate free flow of goods and in the interest of fair trade, easing trade restrictions should be seen as a multilateral responsibility to be shared by all and the developed countries have to take the lead. In fact, developed economies maintain far greater trade restrictions compared to developing economies such as India. The latter cannot even afford to meet the costs that are usually associated with trade restrictions.

The fact is, India is going about removing trade restrictions in a unilateral and systematic way. It is important that developed economies like the United States and the European Union commit themselves to greater liberalization by eliminating all trade restrictions against products from developing economies, especially in the way of trade in agricultural commodities and services.

Of course, India needs to reduce its tariff barriers, but before it does that, It need to be assured that the US and the EU should also open up their markets to a substantial degree to enable other developing countries to access them particularly about market access for agricultural commodities, where developed economies have erected huge walls to protect their own markets.

On the lines of the services sector, developed economies have barely removed any restriction that could assist greater access to their markets. On the contrary, more barriers are being mounted in the name of protecting jobs, security concerns and public interest.

While developed economies maintain peak tariffs on products from developing countries, India does not maintain any such discrimination. In any case, our government has been consistently reducing tariff barriers, irrespective of whether the industry can bear it or not.

India does not maintain any major Non tariff Barriers(NTBs).whereas the developed economies are benefiting most from the existing World Trade Organization (WTO) agreements relating to NTBs and trade defense measures such as subsidies and countervailing measures, safeguard duties and so on. Although the Doha agenda has mandated negotiation for elimination of NTBs and India is actively participating in the negotiation and commit itself to implement the results of the negotiation

Developing economies cannot be oblivious to the needs of the vulnerable sections of their populace and their development. Just as the US, the EU and Japan are not ready to expose their farming community to open competition from outside; India need not expose millions of its small and marginal farmers to cheaper imports from other countries.

The current stalemate in negotiations on agriculture is on this issue. India need not bend over and ease trade restrictions just because the Cancun impasse has to be resolved.

India’s trade policy should be determined by domestic compulsions and should be driven solely by national interest and not by what the US, the EU or the developed countries wants.

It is also not incumbent on India to sign a blank cheque for the sake of multilateralism.