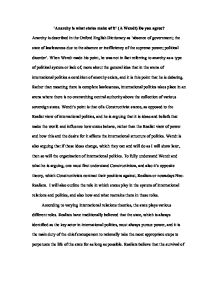 'Anarchy is what states make of it' (A Wendt) Do you agree?

'Anarchy is what states make of it' (A Wendt) Do you agree? Anarchy is described in the Oxford English Dictionary as 'absence of government; the state of lawlessness due to the absence or inefficiency of the supreme power; political disorder'. When Wendt made his point, he was not in fact referring to anarchy as a type of political system or lack of, more about the general idea that in the arena of international politics a condition of anarchy exists, and it is this point that he is debating. Rather than meaning there is complete lawlessness, international politics takes place in an arena where there is no overarching central authority above the collection of various sovereign states. Wendt's point is that of a Constructivist stance, as opposed to the Realist view of international politics, and he is arguing that it is ideas and beliefs that make the world and influence how states behave, rather than the Realist view of power and how this and the desire for it affects the international structure of politics. Wendt is also arguing that if these ideas change, which they can and will do as I will show later, then so will the organization of international politics. To fully understand Wendt and what he is arguing, one must first understand Constructivism, and also it's opposite theory, which Constructivists contrast their positions against, Realism or nowadays Neo- Realism. ...read more.

community or an international institution believes that a sovereign state or ruler is mistreated its own civilians, committing human rights abuses against its own or other civilians or is behaving in a way that endangers other states or the international community itself, it has the power to over-rule sovereignty and take whatever action is necessary. The United States actions when invading Iraq is a prime example of this. They claimed it was their moral duty, whilst other states protested that it was surely illegal to invade a sovereign state that hadn't attacked or invaded any other state; however the US went ahead anyway, against the recommendations of the United Nations, something which did not earn the US any respect in the international community. International law works on a different basis to that of national law which is legislated and passed by central authorities. International laws have not been passed through a legislative body, they are simply agreed on, and even more specifically rulings from bodies such as the U.N Security Council are commands rather than laws as such, and are specific to situations in the international community. States are also restricted in their actions by the various international institutions of the world. The U.N and the E.U can pass rulings and impose sanctions and trade blockades on states that are not behaving in ways they see fit. ...read more.

I believe that Wendt, arguing from a Constructivist viewpoint presents a very tight and persuasive theory of international relations. Obviously the world is not controlled entirely by ideas, but also states are not completely dictated by material forces such as wealth and military power. Both factors play a role in influencing the decisions and actions that actors and states take, and Wendt makes an important point, noting that it is important to look at issues from alternative viewpoints in order to make a balanced a fair judgment before one makes their mind up. Sometimes theories can be proved wrong and others can be vindicated, as clearly shown when the Cold War ended peacefully between American and the USSR, showing that through states and leaders changing and transforming their relations and ideologies, seemingly hopeless situations can be resolved peacefully. This upset Realists who could never have predicted this whilst showing that Constructivism was a real and valid theory of modern international relations. 1 The globalization of world politics- John Baylis and Steve Smith 2 Lecture Notes - Erika Harris - University of Liverpool 3 Ruggie 1998 4 Krasner 2003 5 Constructivism in International Relations: The Politics of Reality - Maja Zehfuss ?? ?? ?? ?? ...read more.