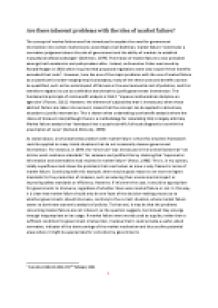 Are there inherent problems with the idea of market failure?

﻿Are there inherent problems with the idea of market failure? The concept of market failure was first introduced to explain the need for government intervention into certain markets and, according to Carl Dahlman, market failure ?constitutes a normative judgement about the role of government and the ability of markets to establish mutually beneficial exchanges? (Dahlman, 1979). The theory of market failure is now prevalent amongst both academics and policymakers alike. Indeed, an Executive Order was issued by Ronald Reagan in 1981 which required that proposed regulations were only issued if their benefits exceeded their costs[1]. However, here lies one of the major problems with the use of market failure as a substitute for wider-ranging empirical analysis; many ...read more.

This is shown when undertaking cost-benefit analysis where the choice of discount rate (although there is a methodology for calculating this) is largely arbitrary Market failure analysis has ?developed into a quasi-scientific full-scale diagnostic test with the prescription of cures? (Zerbe & McCurdy, 1999). As stated above, one fundamental problem with market failure is that this simplistic framework could be applied to many trivial situations that do not necessarily deserve government intervention. For instance, in 1994, the ?wind rule? was introduced in the United States that ?set stricter wind resistance standards? for caravans and justified this by claiming that ?asymmetric information and externalities had resulted in market failure? (Alessi, 1996). ...read more.

In this way, it is clear that market failure should only be one facet of the decision-making process as to whether governments should intervene, contrary to the current situation, where market failure seems to dominate economic analysis of policies. To that end, it may be that the problems concerning market failure are not inherent, as the question suggests, but instead they emerge through inappropriate or lax usage. If market failure were merely used as a guide, rather than a sufficient condition for government intervention, I believe that it could provide a useful, albeit normative, indicator of the shortcomings of the market mechanism and thus outline potential areas where it might be appropriate for correction by governments. ...read more.