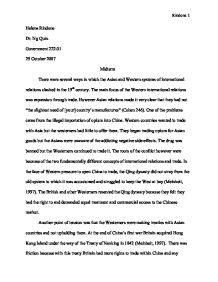 Helena Rindone Dr. Ng Quin Government 222.01 29 October 2007 Midterm There were several ways in which the Asian and Western systems of international relations clashed in the 19th century. The main focus of the Western international relations was expansion through trade. However Asian relations made it very clear that they had not "the slightest need of [your] country's manufactures" (Cohen 246). One of the problems came from the illegal importation of opium into China. Western countries wanted to trade with Asia but the westerners had little to offer them. They began trading opium for Asian goods but the Asians were unaware of the addicting negative side-effects. The drug was banned but the Westerners continued to trade it. The roots of the conflict however were because of the two fundamentally different concepts of international relations and trade. In the face of Western pressure to open China to trade, the Qing dynasty did not stray from the old system to which it was accustomed and struggled to keep the West at bay (Meinheit, 1997). ...read more.

The West was trying to get the Asian countries to adapt to a system of paper money but the Asian countries adamantly opposed it. The Westerners also had a better grasp on sea power. The islanders were of course more vulnerable to European sea power, less organized politically- and they paid the price of loosing land and control (Cohen 244). These are just a few of the things to consider when discussing the clashes that occurred in the 19th century. There were many causes and effects of the collapse of the Chinese domestic structure during the time of the 1911 Revolution. Internal political factors were the inefficient emperors, lack of Manchu leadership, corruption and political decentralization. As the emperor held absolute power, administration in Peking was efficient only if he was an able man and in the 19th century there was no great Ch'ing emperor (thecorner.org). The race to conquer China was growing and where they normally had powerful political influence from the Manchu's, their leadership was lacking. ...read more.

The more people only meant more poverty. Since society was poor the government could only collect so many taxes (thecorner.org). Most of the time tax collection was so corrupt that rebellions broke out resulting in more costs to fix it. With the growing decentralization tax collection was even harder. The country was only growing poorer. Another important factor was the unrest of the people. Their anti-Manchu attitudes could not be suppressed and they were ready to rise up in arms (thecorner.org). Lastly the military was very weak. There were two kinds of forces; the Eight Banner and the Chinese Green Standard. The current forces were a mixture of the soldiers from the different Banners. There were constant rivals and jealousy among them. The efficiency was poor and the there was a lack of centralization which only led to more corrupt officials. The poverty of soldiers is also important to note because the pay they received was horrible and they were forbidden to join any other profession. What was the point in being effective? The fighting spirit was basically gone (thecorner.org) All these points eventually led up to the fall of the Chinese domestic structures. ...read more.