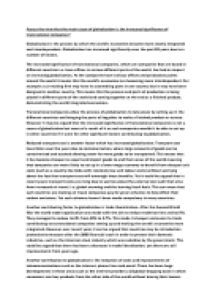 Assess the view that the main cause of globalization is the increased significance of transnational companies. What are the costs and benefits?

There has been huge developments in these areas such as the internet provides a 24 global shopping base in which consumers can buy products from the other side of the world without leaving their homes. They also allow transnational companies to run as they can contact each other via email and have conference calls without having to actually visit the country. Yet it could be argued such things as access to email leaves developing countries behind and prevents them from becoming part of the globalisation and integrated economy as they don?t have the infrastructure and access to such tools. To conclude the increased significance of transnational companies is a factor which has contributed to globalisation which has contributed to globalisation but it not the main cause. Some companies would not be able to exist without things such as reduced transport costs, free trade and telecommunications. Therefore there are equally, if not more significant factors which have contributed towards globalisation. To what extent do the costs of globalisation outweigh the benefits? Globalisation has had both benefits to the world yet there have also been significant costs too. A benefit of globalisation is that world trade as a proportion of GDP has increased. ...read more.

However it can be argued that the situation for such workers may be worse if there was no demand for their goods i.e. they would be jobless. Another cost is that increased globalisation can lead to increased instability due to the world?s economies becoming more closely integrated. This can be represented by the 2008 financial crash which began in America but dragged other countries such as the UK into a recession as they were its main exporting partners. Such a thing has caused some degree of deglobalisation where countries have begun to introduce protectionist measures. Another cost is that there is increased inequality as developing countries don?t have access to the infrastructure and they may get left behind in the process of globalisation. Yet globalisation may help to improve this situation as the development of transnational companies mean that a company could set up in a less developed country to benefit from its rich natural resources and bring some infrastructure building with it. To conclude there are cost associated with globalisation, yet there is also huge benefits which can overall increase world output and efficiency and increase standard of living. Therefore it is unlikely that the costs don?t outweigh the benefits, as more countries develop and grow through globalisation more precautions will take place to reduce costs and increase financial stability to prevent a reoccurrence of 2008. ...read more.