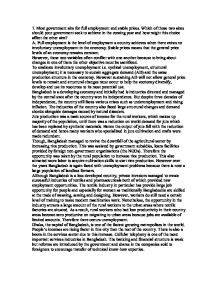 Bangladesh. Most government aim for full employment and stable prices. Which of those two aims should your government seek to achieve in the coming year

7. Most government aim for full employment and stable prices. Which of those two aims should your government seek to achieve in the coming year and how might this choice affect the other aim? A. Full employment is the level of employment a country achieves when there exists no involuntary unemployment in the economy. Stable prices means that the general price levels of an economy remains constant. However, these two variables often conflict with one another because to bring about changes in one of them the other objective must be sacrificed. To eradicate involuntary unemployment i.e. cyclical unemployment, structural unemployment; it is necessary to sustain aggregate demand (AD) and the same production structure in the economy. However sustaining AD will not allow general price levels to remain and structural changes must occur to help the economy diversify, develop and use its resources to its most potential use. Bangladesh is a developing economy and initially had is industries directed and managed by the central state after the country won its independence. ...read more.

Therefore there occurs unemployment. Dhaka, the capital of Bangladesh, is one of the fastest growing metropolises in the world. People's incomes are rising faster in this city than the rest of the country. There is also a boom in the services sector due to this increase. Cellular telephony is one of the most important services industries in Bangladesh. The banking and financial structure is weak but reforms are introduced by the government and shares in the companies sold to foreigners to encourage transfer of technical know-how expertise. Such rapid injections of investment, government spending, exports and consumption has made prices rise in Bangladesh at an increasing rate. Hence there is an element of demand-pull inflation as demand for goods and services are rising faster than the supply of these commodities Due to rising price levels, workers demand for more wages which if unfulfilled lead to severe militant actions by the trade unions. Therefore, to avoid calamities higher wage pay is normally negotiated. The infrastructure is not well-developed and therefore firms face high transport costs and get late in fulfilling orders and so costs of production are rising in the economy. ...read more.

Price levels were kept low and stable in the first place so that the people with low incomes could afford the goods. To achieve these even markets distortions were accepted. But Bangladesh now is becoming more inclined to the market system and is slowly opening its economy to freer trade. It must attempt to let the market operate by the operation of forces of demand and supply. The government should adopt supply-side policies such as increasing education and training levels, encourage improved production techniques, offer incentives for regional investment, privatization, deregulation, increase labour mobility, occupational mobility, increase range of sources of capital available to firms and internalize externalities. The policies in particular to do with education training, health facilities, labour mobility and information will increase labour productively and employment opportunities. These policies though will encourage in turn a rise in aggregate demand once employment and levels of income and profits rise. Increase in AD will cause price leaders to rise due to demand-pull inflation. Due to the extreme costs of unemployment such as greater opportunity cost of output, psychological, damage, increased crimes and black economy activities, the government of Bangladesh should aim at increasing employment rather than keep prices stable. ...read more.