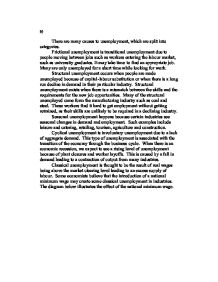 b) There are many causes to unemployment, which are split into categories. Frictional unemployment is transitional unemployment due to people moving between jobs such as workers entering the labour market, such as university graduates. It may take time to find an appropriate job. Many are only unemployed for a short time while looking for work. Structural unemployment occurs when people are made unemployed because of capital-labour substitution or when there is a long run decline in demand in their particular industry. ...read more.

Seasonal unemployment happens because certain industries see seasonal changes in demand and employment. Such examples include leisure and catering, retailing, tourism, agriculture and construction. Cyclical unemployment is involuntary unemployment due to a lack of aggregate demand. This type of unemployment is associated with the transition of the economy through the business cycle. When there is an economic recession, we expect to see a rising level of unemployment because of plant closures and worker layoffs. ...read more.