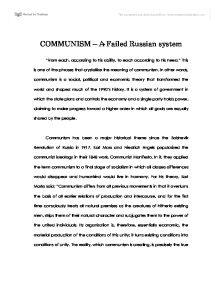 COMMUNISM - A Failed Russian system "From each, according to his ability, to each according to his need." This is one of the phrases that crystallize the meaning of communism. In other words, communism is a social, political and economic theory that transformed the world and shaped much of the 1990's history. It is a system of government in which the state plans and controls the economy and a single party holds power, claiming to make progress toward a higher order in which all goals are equally shared by the people. Communism has been a major historical theme since the Bolshevik Revolution of Russia in 1917. Karl Marx and Friedrich Engels popularized the communist ideology in their 1848 work, Communist Manifesto. In it, they applied the term communism to a final stage of socialism in which all classes differences would disappear and humankind would live in harmony. For his theory, Karl Marks said: "Communism differs from all previous movements in that it overturns the basis of all earlier relations of production and intercourse, and for the first time consciously treats all natural premises as the creatures of hitherto existing men, strips them of their natural character and subjugates them to the power of the united individuals. ...read more.

Every day, women would go from shop to shop to get items. It is estimated that a Soviet woman spent two hours in line every day seven days a week waiting for what they need. During this period the Second World War broke out and drained most of what was left of the already improved state. However, after the war, national unity was improved and the Soviet Union once again became a super power of the world. Stalin's death in 1953 marked the end of the supreme power for the head of the Soviet Party. Stalin's successor, Nikita Khrushchev, marked the beginning of the fall of Communism in the Soviet Union. He believed Stalin's actions were unnecessary and harmful to the process of moving the Socialist government to its goal of complete Communism. During his period of control the public was given some say in the government. A new policy of economy brought in known as "New Course". It helped to balance the agriculture and increase food production, so there were less food shortages. On the whole, growth in the 1950s and 1960s was the result of improvements in labor productivity. ...read more.

The progress made by Russian economy in the past eight years is truly impressive. GDP has gone up about 70%, industrial growth has been 75% and investments have increased by 125%, ranking Russia among the world's top 10 economies. Now the Russians economy is facing more challenging task of making transition to an innovation-driven economy. For Communism, Gorbachev once said: "I thought I could improve the system, but I came to realize that system such as this, which was built by the force of Lenin and Stalin, a system that survived only thanks to the strength of Red-Army and the fear from it, will not be able to survive as a democracy - because of that same fair." Even though the Communism is a failed system in Russia, it transformed the world, created wars, and in effect divided the world into capitalist and communist during the 1900's. Today, in this modern society peoples values a capitalist society. They say that competition leads to invention and the achievement of people's fullest potential. However, although it was failed system in Russia and seems to be impractical, its influence is still present around the world and, even in Russia today. Nations like North Korea, Cuba, Vietnam and China continue to be Communist, although market reforms have been introduced. ...read more.