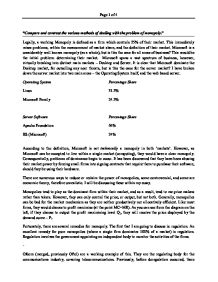 Compare and contrast the various methods of dealing with the problem of monopoly.

"Compare and contrast the various methods of dealing with the problem of monopoly." Legally, a working Monopoly is defined as a firm which controls 25% of their market. This immediately raises problems, within the measurement of market share, and the definition of their market. Microsoft is a considerably well known monopoly (as a whole), but is this the case for all areas of business? This would be the initial problem: determining their market. Microsoft spans a vast spectrum of business, however, virtually breaking into distinct main markets - Desktop and Server. It is clear that Microsoft dominate the Desktop market, far outselling any near threats, but is this the case for the server market? I have broken down the server market into two main areas - the Operating System itself, and the web based server. Operating System Percentage Share Linux 31.3% Microsoft Family 24.3% Server Software Percentage Share Apache Foundation 56% IIS (Microsoft) 24% According to the definition, Microsoft is not technically a monopoly in both 'markets'. However, as Microsoft can be accepted to live within a single market (computing), they would have a clear monopoly. Consequentially, problems of dominance begin to occur. It has been discovered that they have been abusing their market power by forcing small firms into signing contracts that require them to purchase their software, should they be using their hardware. ...read more.

who sells the gas to business and domestic users would be separated from Transco who manage the actual gas pipelines. This would lower the barriers to entry (sunk costs) for new firms, as they would not have to 'produce' the gas, nor have it routed to their customer's homes. They can simply purchase it at a wholesale rate, and sell that on with a margin for profit. - Other countries have adopted a different method for regulating monopolies, called 'Rate of return' regulation. This is where companies are taxed a percentage of their profits, however this has similar problems. As there is no price ceiling introduced by this method, the monopolistic firm(s) may choose to simply increase their prices in order to cover the additional tax. This actually solves no problems, and leaves the consumer worse off, as they would be faced with paying higher prices. As the market is dominated by the few single firms, it may leave the consumer no choice but to purchase their goods from those single or sole suppliers at the higher cost. The competition commission also has a strong say on mergers, whether or not they are permitted to go ahead, if there is a threat to the market of a monopoly. An example of this was the Halifax Bank of Scotland and Lloyds TSB merger which resulted in a monopoly for the merged company of the mortgage market - over 30% market share. ...read more.

However, should the market be deregulated - for example, if Thames Water sell the water a wholesale price (such as British Gas does with Gas) then additional firms can afford to enter the market with lower barriers to entry. Finally, there is information asymmetry, where the existing firm has the experience and the knowledge about the industry that allows them to be more productive and drive down their costs. If the information is not known to the new entrants, this can be a sunk cost for them, acting as yet another deterrent for entering the market. However, having discussed the problems that monopolies may bring, the reverse can be true. Monopolies can be beneficial to a market because they achieve greater economies of scale, and tend to have a lower market price than smaller firms - as they are more able to pass on cost reduction. A typical example of this would be the comparison of a monopolistic firm such as Tesco against Jay's News. A typical product, one pint of milk will cost around 49 pence in a small firms shop, or 26 pence in Tesco. At a 53% saving, it seems clear that monopolies can benefit the greater economy. Sources: NTL Price Capping: http://www.ofcom.org.uk/static/archive/oftel/ind_info/broadcasting/ntlprice/section2.htm Page 4 of 4 ...read more.