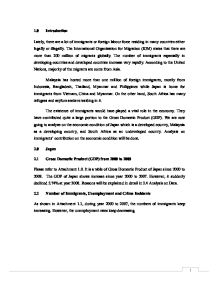 Comparing the effects of immigration on GDP in Malaysia, Japan and South Africa.

1.0 Introduction Lately, there are a lot of immigrants or foreign labour force residing in many countries either legally or illegally. The International Organization for Migration (IOM) states that there are more than 200 million of migrants globally. The number of immigrants especially in developing countries and developed countries increase very rapidly. According to the United Nations, majority of the migrants are come from Asia. Malaysia has hosted more than one million of foreign immigrants, mostly from Indonesia, Bangladesh, Thailand, Myanmar and Philippines while Japan is home for immigrants from Vietnam, China and Myanmar. On the other hand, South Africa has many refugees and asylum seekers residing in it. The existence of immigrants would have played a vital role in the economy. They have contributed quite a large portion to the Gross Domestic Product (GDP). We are now going to analyze on the economic condition of Japan which is a developed country, Malaysia as a developing country, and South Africa as an undeveloped country. Analysis on immigrants' contribution on the economic condition will be done. 2.0 Japan 2.1 Gross Domestic Product (GDP) from 2000 to 2008 Please refer to Attachment 1.0. It is a table of Gross Domestic Product of Japan since 2000 to 2008. The GDP of Japan shows increase since year 2000 to 2007. However, it suddenly declined 2.74% at year 2008. Reasons will be explained in detail in 2.4 Analysis on Data. 2.2 Number of Immigrants, Unemployment and Crime Incidents As shown in Attachment 1.1, during year 2000 to 2007, the numbers of immigrants keep increasing. However, the unemployment rates keep decreasing. 2.3 Illegal Immigrants in Japan Japan has a population of 127,433,494 as on July 2007 estimate and the news stated that approximately 10,000 illegal immigrants come to Japan each year. Therefore, the estimated number of illegal immigrants in Japan is 250,000 which mean 0.2% of population. There are few proofs of illegal immigrants in Japan. ...read more.

Therefore, when there are no immigrants in South Africa, the unemployment will be reduced. It seems to be a benefit for the economy of South Africa. A leader in Ramaphosa, Thapelo Mgoqi says that the locals want all these foreigners to go back to their own lands. Samantha Duplessis, 23, a woman of mixed race says that she has been looking for job for four years, but all the employers want to hire foreigners. Many complaints on. foreign immigrants are found within the locals: they commit crimes They hold jobs that others deserve. (Berry Bearak and Celia W. Dugger, South Africans Take out Rage on Immigrants, 20 May 2008) 6.0 Factors of the Trend of Immigrants The trends of immigrants mean the changes happen to the number of inflow of the immigrants. The factors that cause the trends may be varies as different countries have dissimilar economic structure, government policies, political condition, culture and custom. 6.1 Factors of the Trend of Immigrants in Japan 6.1.1 Economy "The economy of Japan is the second largest in the world after United State." (Economy of Japan, Wikipedia) The stability of Japan economy has attracted the attention of immigrants from Malaysia, Philippines, China, and Brazil to the country. The growing status of Japan is able to guarantee the employment of the immigrants. Japan is able to provide the immigrants a chance for job advancement with higher salary to have a better living standard compared with their home country. "In 2007, many Japanese industrialists have begun to advocate the acceptance of large numbers of overseas immigrants to address labor shortfalls, consumer market shrinkage and pension funding problems that population decline will bring."(Glenda S. Roberts, Labour Migration to Japan, Japan focus) 6.1.2 Political Condition Due to the impact of terrorist attacks on the United States on September 11, 2001, Japan has adopted an action plan to prevent terrorism. The Immigration Bureau is undertaking stricter entry and admission procedures, to restrict the inflow of immigrants from other countries. ...read more.

On the other hand, employers can save more money by giving a higher pay. This is because employers do not need to spend more time and money to recruit more workers. Money used to hire new workers is more costly than giving them a higher pay. Besides, this can also helps the country to reduce the chances for foreign workers to carry out crimes as they are having a sufficient pay that allows them to continue living. 9.5 Control The Number Of Immigrants That Come Into Malaysia The existence of foreign workers has given a big assistance in different sector. However, the number of immigrants should be controlled as too much of immigrants will give problems instead of help in the future. The increased of immigrants in Malaysia has created an unstable society and also an increased in total unemployment of Malaysian workers. This is due to the low pay for alien labours making employers to employ them with a lower cost rather than employing local labours with a higher cost. Hence, government should control this number in order to create a safer environment and to increase the chances for local labours to be hired. 10.0 Conclusion The immigrants in Japan and Malaysia have huge contribution to the economy. However, immigrants in South Africa have brought a lot of negative effects to the country. Therefore, we can make a simple conclusion: developed and developing countries require a lot of foreign labours in filling the vacancies in the labour market; undeveloped countries should offer the employment to the locals so that the unemployment rate is reduced to the minimum. Before the government deciding which policy is to be used, they should analyze the pros and cons of this matter before allowing them being in the country. As a rational economist, we should very appreciate what the foreign labours have contributed to our economy. 11.0 Reference http://www.southafrica.info/travel/documents/immigration-trends.htm http://www.nytimes.com/2008/05/20/world/africa/20safrica.html http://www.statssa.gov.za/publications/Report-03-51-03/Report-03-51-032003.pdf http://www.statssa.gov.za/publications/Report-03-51-03/Report-03-51-032003.pdf http://www.siiaonline.org/?q=programmes/insights/domestic-crime-foreign-workers-regional-ties http://www.cormsa.org.za/wp-content/uploads/2010/07/fmsp-fact-sheet-migration-in-sa-june-2010doc.pdf http://www.saps.gov.za/saps_profile/strategic_framework/annual_report/2008_2009/2_crime_situation_sa.pdf http://www.nationmaster.com/graph/cri_mur-crime-murders http://www.longcountdown.com/2007/11/24/illegal-immigrants-reason-for-fingerprinting-non-japanese/ 29 July 2010 http://www.stat.go.jp/english/data/chouki/28.htm http://www.stat.go.jp/english/data/chouki/02.htm http://www.stat.go.jp/english/index/official/content.htm http://www.britannica.com/bps/additionalcontent/18/26999241/The-Role-of-International-Migration-in-Infectious-Diseases-The-Hiv-Epidemic-and-its-Trends-in-Japan http://www.buzzle.com/articles/pros-and-cons-of-immigration.html ?? ?? ?? ?? ...read more.