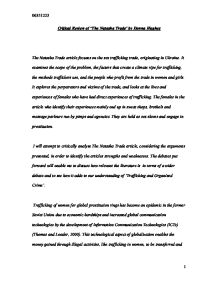 Critical Review of 'The Natasha Trade' by Donna Hughes The Natasha Trade article focuses on the sex trafficking trade, originating in Ukraine. It examines the scope of the problem, the factors that create a climate ripe for trafficking, the methods traffickers use, and the people who profit from the trade in women and girls. It explores the perpetrators and victims of the trade, and looks at the lives and experiences of females who have had direct experiences of trafficking. The females in the article who identify their experiences mainly end up in sweat shops, brothels and massage parlours run by pimps and agencies. They are held as sex slaves and engage in prostitution. I will attempt to critically analyse The Natasha Trade article, considering the arguments presented, in order to identify the articles strengths and weaknesses. The debates put forward will enable me to discuss how relevant the literature is in terms of a wider debate and to see how it adds to our understanding of 'Trafficking and Organised Crime'. Trafficking of women for global prostitution rings has become an epidemic in the former Soviet Union due to economic hardships and increased global communication technologies by the development of Information Communication Technologies (ICTs) (Thomas and Loader, 2000). This technological aspect of globalization enables the money gained through illegal activities, like trafficking in women, to be transferred and laundered in any country. ...read more.

"The prostitutes themselves tend to adjust the narrative stories concerning various episodes or aspects of their life or profession, according to the perceived expectation, curiosity and focus of interlocutor. This is typical of persons aware of being in irregular situations." The research relied on therefore may not be valid and may be a distorted version of the truth. Certain aspects of the journal conforms to critical criminology, exploring assumptions and ideas reflecting power and power relationships, interlinking with gender, class and poverty issues. The article section on the gendered supply and demand challenges a frequent assumption that poverty is the most important factor in determine which countries will become the sending countries. Growing inequality within a nation is likely to increase the pressure to emigrate, due to the feminisation of poverty which is a direct result of the transition to a market economy in central and Eastern Europe following the fall of the Berlin wall. Poverty among women, who account for between 70% and 95% of official unemployment figures, and their continuing marginalisation in society, force many to seek a better life. However, the extent to which women will turn to sex work, either local or requiring domestic or international migration, is historically and culturally contingent. One of the consequences of the new situation created by the fall of the Soviet empire was the development of networks of 'businessmen' as a manifestation of organised crime in central and eastern Europe, resulting in more criminal activities. ...read more.

These categories can be further divided, and it is often the case that smuggling involves a loose hierarchy of persons. Women who report on their experiences of being trafficked usually cannot give any information on the larger organization of their traffickers as they deal with only a handful of people throughout the process. Some criminals remain hidden as illegal jobs are passed down to inferior people resulting in an unrepresentative range of offenders. Trafficking in conclusion is a highly profitable business which involves different parties all having a direct influence in the success of the crimes. It is a highly silenced business and the main culprits are often hidden. Trafficking is a wide area and most research has been done in regards to the sending countries. Difficulties arise when discussing this topic area as mentioned, a true insight into the problems and causes may not be evident due to over exaggerated statistics and ambiguous stories reflecting ones experiences being given to researchers. Globalisation and global inequalities may have a large part to play in the causes and successes of the human trafficking business as a whole, giving some countries an advantage over others in terms of power and money. All the issues mentioned need to be addressed in order to come to more clear, reliable, focused evidence reflecting the true interactions, experiences and input from those who are involved directly or indirectly in the Transnational Trafficking of Women. ...read more.