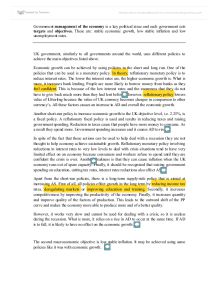 Current UK economic policies. Government management of the economy is a key political issue and each government sets targets and objectives. These are: stable economic growth, low stable inflation and low unemployment rates.

Government management of the economy is a key political issue and each government sets targets and objectives. These are: stable economic growth, low stable inflation and low unemployment rates. UK government, similarly to all governments around the world, uses different policies to achieve the main objectives listed above. Economic growth can be achieved by using policies in the short and long run. One of the policies that can be used is a monetary policy. In theory, reflationary monetary policy is to reduce interest rates. The lower the interest rates are, the higher economic growth is. What is more, it increases bank lending. People are more likely to borrow money from banks as they feel confident. This is because of the low interest rates and the awareness that they do not have to give back much more than they had lent before. Moreover, reflationary policy lowers value of LSterling because the value of UK currency becomes cheaper in comparison to other currency's. ...read more.

What is more, it relies on a rise in AD to occur at the same time. If AD is to fall, it is likely to have no effect on the economic growth. The second macroeconomic objective is low stable inflation. It may be achieved using same policies like it was with economic growth. This time deflationary fiscal policy has to be applied to have any effect on AD. Furthermore, there is a need to raise taxes and reduce government spending. AD would decrease as injections fall and withdrawals rise. Secondly, government budget deficit might improve as tax revenues are expected to rise and spending falls. Additionally, deflationary fiscal policy reduces imports due to falling consumption so the balance of payments would improve. Deflationary monetary policy is likely to reduce inflation by raising interest rates, reducing bank lending or strengthen value of LSterling. Thanks to these factors, the average price level would fall as AD declines. Another advantage is that it can be changed every month by the Bank of England and is quick to have an impact. ...read more.

Finally, cut in income tax rates will also increase the incentive to work. As a result frictional unemployment will fall as people spend less time looking for a new job. Expansionary monetary policy would reduce interest rates, bank lending and cause LSterling to depreciate. It will cause a rise in AD as consumers and businesses spend and borrow more. Cyclical unemployment falls. It also is quick to have an impact that is why it is sensible to be used during a recession. It moves AS curve to the right as well because of the rise in investment. But there is a conflict of objectives as fall in unemployment causes inflation to rise. Itmay even lead to overheating the possibility and damage the long term growth prospects of economy. To be fair, it is only short term policy which is not likely to be effective at dealing with unemployment so much as with inflation. In conclusion, policies help UK government to improve its performance in lots of ways. However, some of them are short-term and are only used to improve current situation but without looking at the future consequences. ...read more.