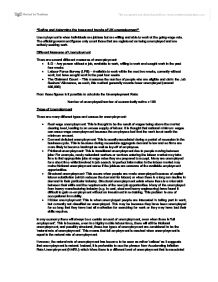 “Define and determine the types and trends of UK unemployment”

Unemployment is when individuals are jobless but are willing and able to work at the going wage rate. The official government figures only count those that are registered as being unemployed and are actively seeking work.

There are several different measures of unemployment:

From these figures is it possible to calculate the Unemployment Rate:

There are many different types and causes for unemployment:

However, the natural rate of unemployment has become to be seen as rather ‘callous’ as it suggests that unemployment is natural. Instead, it is preferable to use the phrase: Non-Accelerating Inflation Rate Unemployment (NAIRU) which infers there is a different level of unemployment that is associated with the rate of inflation. At NAIRU the demand for labour is equal to the number of people prepared to supply their labour for the current wage rate. Thusly, any unemployment is equilibrium unemployment and arises from labour market imperfections (will go into NAIRU at greater depth later).

Also the threat, or fear, of unemployment means that people are less likely to buy houses or expensive consumer goods, and so it aggregate demand is reduced.

The Labour government has introduced a number of policies to reduce unemployment by acting on the supply of labour, these include:

Unemployment Trends in the UK

I liked this essay as it gives a good overview of unemployment, without getting bogged down in argument. This should be a good resource to look at for revision. The definition of unemployment is covered, the types are summarised, the ...

I liked this essay as it gives a good overview of unemployment, without getting bogged down in argument. This should be a good resource to look at for revision. The definition of unemployment is covered, the types are summarised, the costs are covered. The policies to reduce unemployment is poorly covered, however, as this should be looking at fiscal and monetary policies also. Trends are briefly looked at, but if you are preparing for an exam it would be wise to look at more recent data.

The analysis in here is sound. I liked the definition of unemployment, as this is a popular question and often the definition is confused. You must put "willing and seeking work" and this essay does this well. I would note that exams often like to catch people out by asking you to define the unemployment rate, this is as simple as quoting the definition and then adding the formula given in this essay! The types of unemployment are given a good overview, however I would've liked to have seen some diagrams showing shifts in aggregate demand, etc. Diagrammatical analysis is an easy way to pick up marks, as it shows a variety of skills and a strong understanding of what causes unemployment. The discussion of NAIRU is strong, as this is a concept which is commonly forgotten about or misunderstood. When talking about the costs of unemployment, it would be good if a PPF was included as this shows the misallocation of resources and waste of capacity. I always like to talk about the costs to the unemployed, as this can bring social problems. Hysteresis is a concept which examiners like, whereby the long term unemployed lose any skills or confidence making it harder for them to find work. As mentioned above, when talking about policies you really need to be clearer and discuss monetary and fiscal approaches.

There isn't much to structure here, as this is more of an overview and revision sheet than an argument. Bullet points are used well to differentiate between points, and technical terms are used throughout. Spelling, punctuation and grammar are fine.