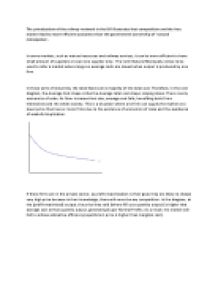 Did the privatisation of British Rail lead to an efficient outcome?

﻿The privatisation of the railway network in the UK illustrates that competition and the free market lead to more efficient outcomes than the government ownership of ?natural monopolies?. In some markets, such as natural resources and railway services, it can be more efficient to have small amount of suppliers or even one supplier only. The term Natural Monopoly comes to be used to refer a market where long-run average costs are lowest when output is produced by one firm. In these sorts of industries, the total fixed cost is majority of the total cost. Therefore, in the cost diagram, the Average Cost shape is like the Average total cost shape: sloping down. ...read more.

To tackle this issue, some economies conclude these natural monopolies, the best owner of it is the government. When the supplier in these industries are state-owned, their goal will no longer be profit-maximisation. Instead, they will attempt to achieve allocative efficiency. (There is no productive efficiency in natural monopolies because there is no minimum average cost.) Hence, as shown in the diagram, Price=AR=MC, achieving allocative efficiency. As a result, quantity output be higher and price consumers pay will be lower, compared to the situation which owners of natural monopolies are private firms. For privatisation In the history of British Rail, during the age of nationalisation (1948-1995), the number of passengers was falling until privatisation in 1995. ...read more.

It allows them to use a large amount of profits to pay out in dividends to shareholders instead of reinvesting. Furthermore, once big investment banks bought share from the public, benefits from train operating companies would no longer benefit the public. For nationalisation There are several advantages for public ownership of railway services. When train operators want to invest a new programme, it has lower borrowing cost for government-financial investment, which will save a lot. Against nationalisation Moreover, maintaining and upgrading the railway service will cost the government billons of pound per year. If costumers complain of high fares to the government, they must spend more to subsidise the railway, which means a reduction in public spending in other sectors. In conclusion, when an economy attempt to deal with Natural Monopolies, it has to consider the consequence of either way. ...read more.