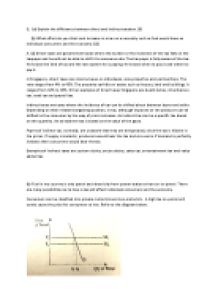 Direct and Indirect Taxes and their effect on Singapore.

﻿Q. (a) Explain the difference between direct and indirect taxation. (8) (b) What effect do you think and increase in a tax on a necessity such as fuel would have on individual consumers and the economy (12) A. (a) Direct taxes are government taxes where the burden or the incidence of the tax falls on the taxpayer and he will not be able to shift it to someone else. The tax payer is fully aware of the tax. He knows the kind of tax and the rate system he is paying. He knows when to pay it and where to pay it. In Singapore, direct taxes are income taxes on individuals, sole properties and partnerships. The rate ranges from 4% to 45%. The property tax falls on assets such as houses, land and buildings. It ranges from 12% to 30%. Other examples of direct taxes Singapore are death duties, inheritances tax, road tax and payroll tax. ...read more.

Refer to the diagram below: The tax causes the supply to fall from SS to SS1. The price rises from P to P1. The supply of petrol is perfectly elastic because Singapore imports all her petrol from the middle east market. The demand for petrol is inelastic because it is an external good and also because the proportions of costs it takes up on private motoring is rather small. The motorists real income would fall but not very significantly and it is also unlikely that in Singapore they would give up cars. In the case of commuter who use public transport, they too may suffer a fall in real income. Both the bus and MRT service run on petrol and petrol electricity. The tax will raise the cost of operation. Because commuters? demand for public transport is inelastic, the incidence of tax will be pushed on them. The PED is inelastic because public transport is an inferior good. It is the cheapest form of transport people can reply on. ...read more.

For those companies who are unable to meet the higher wage bill, they will have to lay off workers. Unemployment in the country will increase. The inflationary trend will have its effects on savings, investment and on external balances. During inflation, savings fall because people have to spend more of their income to buy the same basket of goods. A fall in savings may cause interest rates to rise, in turn may cause a fall in investment. Refer to the diagram below: If the Marginal efficiency or capital (MEC) is elastic , the fall in investment (I to I1) will be more proportionate than the rise in interest rates (r to r1). A fall in investment will slow down the country?s economic growth. Externally, the country may have loose its competitiveness due to the higher prices of its exports. Growth in exports may slow down and imports may pick up. The country?s balance of payments worsens. In its worse scenario, the country may develop a deficit, and external debt, increased unemployment and a general fall in living standards. ...read more.