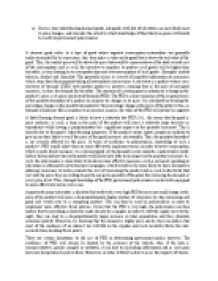 Discuss how habit-forming demerit goods and goods with lots of substitutes are each likely react to price changes, and consider the extent to which knowledge of their likely response will would be useful to government policymakers. [12]

Transfer-Encoding: chunked ﻿1. Discuss how habit-forming demerit goods and goods with lots of substitutes are each likely react to price changes, and consider the extent to which knowledge of their likely response will would be useful to government policymakers. A demerit good refers to a type of good whose negative consumption externalities are generally under-accounted for by consumers, thus they place a value on the good that is above the real value of the good. Thus, the market price will be above the price that would be representative of the total societal cost of the consumption, and as such, the incentive to suppliers to produce such goods will be higher than desirable, in turn leading to an overproduction and overconsumption of such goods. Examples include tobacco, alcohol and chocolate. This generally occurs as a result of imperfect information to consumers which stops them from properly taking all externalities into account. A substitute is a product whose cross elasticity of demand (XED) with another product is positive, meaning that as the price of one good increases, so does the demand for the other. ...read more.

As the demand is price inelastic, a policymaker could deduce that an indirect tax on the product will likely have little to no impact on the quantity consumed. As such, the policymaker is more likely to decide on more effective measures, such as increased spending on education or informative advertisement campaigns, which would be far more likely to lower demand by allowing consumers to better evaluate the cost of consuming the product and as such, better factor that cost into the price they are willing to pay for any given quantity of the good, thus lowering the demand at every price level. Thus, through knowledge of the PED, government policymakers can be better equipped to more effectively tackle such issues. A good with many substitutes is likely to find itself with a very high PED because any small change in the price of the product will cause a disproportionately higher number of consumers to stop consuming said good and switch over to a competing product. This can then be used by policymakers in order to implement more effective fiscal policies. ...read more.

is equally important to the PED. Similarly, when trying to lower consumption of demerit goods, the government will likely also want to take into account other factors that affect demand, such as income level, education level, demography of consumers and the level of information available in order to better make a more informed decision on the policy that should be implemented. In regards to the usefulness between the two cases, I believe that knowledge of the PED will be far more important in policy regarding demerit goods rather than goods with many substitutes. This is because knowledge of the PED in attempts to lower consumption is perhaps the single most important deciding factor as policies targeted at demerit goods with a low PED are essentially the opposite of policies aimed at goods with a high PED. As such, if the government would not be aware of the PED in the case of the habit forming demerit good, they could end up attempting to lower consumption through taxation which would be a wholly ineffective measure. Thus, through knowledge of the PED, they can better understand that the correct policy is likely to be one that attempts to change demand without changing the price directly. ...read more.