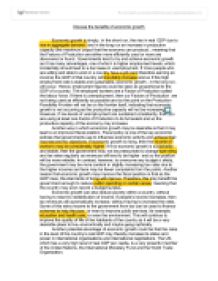 Discuss the benefits of economic growth

Discuss the benefits of economic growth Economic growth is simply, in the short run, the rise in real GDP due to rise in aggregate demand: and in the long run an increase in productive capacity (the maximum output that the economy can produce), meaning that the Factors of Production are either more efficiently used or more are discovered or found. Governments tend to try and achieve economic growth as it has many advantages, one of which is higher employment levels, which incidentally should lead to a decrease in unemployment. If more people who are willing and able to work in a country have a job (and therefore earning an income) the GDP of that country will inevitably increase and so if this high employment rate is stable and sustainable, economic growth, in the long run, will occur. Hence, employment figures could be seen as proportional to the GDP of a country. The employed workers are a Factor of Production called the labour force. If there is unemployment, then our Factors of Production are not being used as efficiently as possible and so the point on the Production Possibility Frontier will not be on the frontier itself, indicating that economic growth is not occurring as the productive capacity will not be increasing. However, if low levels of unemployment are sustained consistently, then you are using at least one Factor of Production to its full extent and so the productive capacity of the economy may increase. ...read more.

One way in which it may not be desirable is that it may lead to wages being increased too rapidly and therefore, driving up inflation. Inflation is the sustained rise in the general price level. This happens because if the people's income is considerably larger than previously, they will inevitably have more money to spend on wants, as well as needs. This means there may be a higher demand on products causing the RPI (Retail Price Index) to record an increase in the price of consumer goods and services purchased in the UK. This then converts into how much inflation increases by. Inflation may cause a nuisance to people with different jobs. For example, some workers may not receive a pay rise that keeps up with inflation and therefore will have to struggle, whilst others who may borrow money from the bank may benefit if inflation reduces the real rate of interest. Therefore, in general the government is likely to gain from inflation as it is usually a large net borrower and as tax rates aren't adjusted in line with inflation it may receive extra tax revenue. This is known as fiscal drag. Another way in which economic growth may be undesirable is that it may be unsustainable. This means that the economic growth endangers future generations' ability to expand productive capacity, for example if the government decides to expand on the heavy industry without regards to pollution control, there will probably be damage to the environment. ...read more.

It is a fact that the economy is growing, but as the graph also shows, the economy was also growing prior to the recession. Many economists failed to predict the bust of the economy and so all in all this rate of growth may not be a good thing for the UK. Therefore, it may be difficult to predict if this economic growth can be sustained for a fairly long period of time. In contrast to this point, it could be fairly unlikely that another recession as big as the most recent one will hit the UK so soon after this recovery. Whilst there are arguments for and against economic growth, the arguments conclude that economic growth brings more desire than harm for a country. This is because it will create many more positives than negatives for the economy, and overall economic growth would help the entire country in the long run. The problems, especially sustainability, can be solved over time and are provide the country with much smaller disadvantages than advantages. Given that economic growth may open up more jobs, as tackling unemployment is an objective for the government, then this growth could be seen as a target for the government. In addition, as explained above, the government itself would be in a better fiscal position if economic growth occurs and so it may need to borrow less, reducing the country's budget deficit. All these pros combine to show that economic growth, if stable and sustainable, is a very desirable objective for the government. ...read more.

*****
A well considered piece of work that explains the benefits and costs of economic growth well.

This essay responds to the question at a good level, looking at the benefits of economic growth and the limitations. If I were answering this question, I would've looked at the difference between short-run and long-run growth, which would allow ...

This essay responds to the question at a good level, looking at the benefits of economic growth and the limitations. If I were answering this question, I would've looked at the difference between short-run and long-run growth, which would allow a judgement about whether both are desirable. The reason this essay doesn't access the top marks, despite the evaluative discussion of the limitations, is that there is no discussion of the extent. A paragraph such as "the extent to which growth is beneficial depends upon" would've enabled a strong essay. It is not good enough at A-Level to come to a conclusion and say "economic growth brings more desire than harm for a country". Although the word always isn't used in this sentence, it is suggested due to the lack of sometimes, or equivalent. It is essential to show the examiner that you are aware not all situations are the same, and unfortunately this essay doesn't do that.

The analysis in this essay is good. The mechanisms are explained well. For example "Economic growth can also reduce poverty within a country" is not simply stated, with the essay going onto explaining how it can reduce poverty. Being able to explore concepts rather than assert them will gain you credit. I feel this essay could've elaborated upon points at times. The paragraph on international status needed to address why this is important to an economy. The exploration of sustainability is good, and there is good awareness of why this is significant to economic growth. Although not explicit, this is showing exploration of whether economic growth is desirable to different groups and viewpoints. I would make this more clear, as this shows strong analysis. For example, commenting that economic growth may not be favourable in the eyes of the poor due to widening inequality, but that it will be beneficial for the rich, will allow you to gain the top marks. I always ask myself "is it always?" and this prompts you to address the difference in viewpoints. You can take this further to look at different political and economic theories, but they aren't necessary.

The essay doesn't have the best structure. Yes, economic growth is defined in the introduction, but the introduction begins to analyse. I would've made sure the introduction is concise and sets up the argument. The style here is good, with each step of a mechanism flowing well from the next due to the language used. I like the use of technical terms and the definitions given, as this shows a strong foundation of knowledge. Spelling, punctuation and grammar are strong.