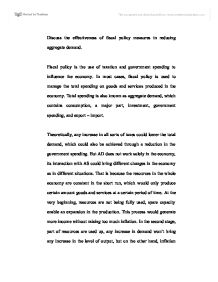 Discuss the effectiveness of fiscal policy measures in reducing aggregate demand. Fiscal policy is the use of taxation and government spending to influence the economy. In most cases, fiscal policy is used to manage the total spending on goods and services produced in the economy. Total spending is also known as aggregate demand, which contains consumption, a major part, investment, government spending, and export - import. Theoretically, any increase in all sorts of taxes could lower the total demand, which could also be achieved through a reduction in the government spending. But AD does not work solely in the economy, its interaction with AS could bring different changes in the economy as in different situations. That is because the resources in the whole economy are constant in the short run, which would only produce certain amount goods and services at a certain period of time. ...read more.

Tax on income could be seen as a direct taxation. An increase in the tax would lower disposable income, which in turn could be used to decrease consumption. On the other hand, indirect tax e.g. VAT could be raised and which would put up the existing price of certain products. Consumer would consume less as a result of increase of price in real terms. Moreover, less consumption would dilute the circular flow of income, bring down multiplier effect. Any of them would lower the level of aggregate demand and hence reduce economic growth, but different situations would generate different outcomes. From AD1 to AD2, as in the early stage, there is big increase in the level of output but only a slight increase in the level of inflation as AD2 move toward AD3, expansion in output slows down, but inflation increase at a higher rate. ...read more.

This would register a negative quantity in AD, which could possibly increase AD and hence boost the economy. However, the economy may still be slow down, because fewer jobs are being created with respect to the smaller scale of production. Although fiscal policy affects more in demand than supply, we can not ignore it. Increase in taxation could lower the incentives for workers to work, which would damage the economy. Lack of government spending would slow down economic growth and reduction in investment would trigger this effect. All of the above would lower aggregate demand further in the long run. As mentioned, these policies would also bring side effects to the economy, and hence some other policies should be adopted at the same time either solve these problems or enhance its fiscal policies. In reality, government chooses monetary policy and supply side polices to reduce aggregate demand almost in every country. ...read more.

This essay engages well with the question, analysing how fiscal policy reduces aggregate demand and then evaluating why it doesn't always occur. However, I feel there isn't a sharp focus or discussion on the effectiveness of fiscal policy. There needs ...

This essay engages well with the question, analysing how fiscal policy reduces aggregate demand and then evaluating why it doesn't always occur. However, I feel there isn't a sharp focus or discussion on the effectiveness of fiscal policy. There needs to be some exploration of "the effectiveness depends upon" or "the extent to which fiscal policy is effective". Without doing this, the essay won't reach the highest marking bands. This essay has looked at limitations, such as the problem with marginal propensity to consume, but has not taken this further by saying how fiscal policy is thus not effective. It's quite a simple step, but crucial to the question!

The analysis in this essay is strong. I particularly liked how they were perceptive in saying that fiscal policy can affect aggregate supply in some cases, so it is key that this isn't ignored when talking about deflationary measures. Such perception shows a strong understanding of economics beyond the basics, and will gain credit if analysed well. The diagrammatical analysis is strong as they reference the diagram in writing, for example "From AD1 to AD2, as in the early stage, there is big increase in the level of output but only a slight increase in the level of inflation". Making comments based on shifts in the diagram is something you should always include in an economics essay, as it shows understanding and analytical skills. The mechanisms are well explained, and it is not simply asserted that taxation will decrease consumption. This essay's explanations flow well, and so the analysis is convincing. The limitations are explained well, and technical concepts such as marginal propensity to consume are included. Being able to include technical arguments such as this will gain credit, and it was nice to see this! As mentioned above, this essay is just missing the last step of discussing the "extent to which fiscal policy is effective". I think to address this, external factors could've been explored more. Shocks such as Japan's tsunami are topical ones to include!

This essay has a strong structure. I liked how the introduction defined the key terms, as this allowed for a sharp argument. The style is very strong, using critical language and technical concepts throughout. There are a few flaws in grammar such as "Although fiscal policy affects more in demand than supply" whereby the syntax is wrong. This somewhat detracts from the content, so it is key to get a proof read done.