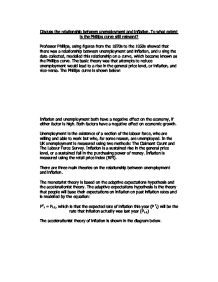 Discuss the relationship between unemployment and inflation. To what extent is the Phillips curve still relevant?

Discuss the relationship between unemployment and inflation. To what extent is the Phillips curve still relevant? Professor Phillips, using figures from the 1870s to the 1950s showed that there was a relationship between unemployment and inflation, and using the data collected, modelled this relationship on a curve, which became known as the Phillips curve. The basic theory was that attempts to reduce unemployment would lead to a rise in the general price level, or inflation, and vice-versa. The Phillips curve is shown below: Inflation and unemployment both have a negative effect on the economy, if either factor is high. Both factors have a negative effect on economic growth. Unemployment is the existence of a section of the labour force, who are willing and able to work but who, for some reason, are unemployed. In the UK unemployment is measured using two methods: The Claimant Count and The Labour Force Survey. Inflation is a sustained rise in the general price level, or a sustained fall in the purchasing power of money. ...read more.

To achieve a permanent reduction you must use supply side policies. The New Classical view is that not only is the Phillips curve vertical in the long run, but also in the short run, and that there is no place for demand management policies because even in the short run the only effect of an increase in aggregate demand will be a rise in prices. The two assumptions of this model are that wages and prices are flexible, and that expectations are rational. The new classical economists believe that the markets will clear instantaneously and that there is no disequilibrium unemployment. All unemployment is therefore `voluntary unemployment' as people choose not to take jobs due to a lack of incentives to do so. Rational expectations are expectations that are based on the current situations. These expectations are based on the information at hand. While this information may be imperfect and therefore people will make errors, these errors will be random. ...read more.

If people expect a more rapid rise in AD to be sustained, firms will invest more, thereby reducing unemployment in the long run and not just increasing the rate of inflation. The long run Phillips curve will thus be downward sloping. The short and long run Phillips curve may be kinked. Reductions in real aggregate demand may only have a slight affect on inflation if real wages are sticky downwards. From about 1966 the Phillips curve relationship seemed to break down. The UK and many other countries in the western world too, began to experience growing unemployment and higher rates of inflation as well. From 1993-2002 the Phillips curve has been horizontal with ever falling unemployment and stable inflation. The explanation for this is as follows. NAIRU (non accelerating inflation rate of unemployment) depends on institutional factors in economy e.g. strength of trade unions, flexibility in labour markers, labour mobility, social security system, education and training, and the taxation system. These are called supply side factors. Improving the supply side reduces NAIRU so unemployment can fall while inflation stays stable. This is shown in the diagram below. [image001. ...read more.