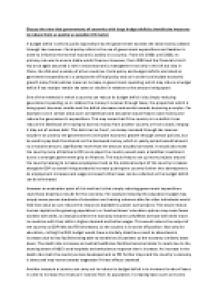 ﻿Discuss the view that governments of countries with large budget deficits should take measures to reduce them as quickly as possible (15 marks) A budget deficit is where public expenditure by the government exceeds the total money collated through tax revenues. Fiscal policy refers to the use of government expenditure and taxation in order to influence the level of economic activity in a country. From the 1980s until 2008, its primary role was to ensure stable public finances. However, from 2008 and the financial crisis it has once again assumed a role in macroeconomic management not only in the UK but also in China, the USA and a variety of other countries. Fiscal policy and budget deficits are linked as government expenditure is a component of fiscal policy and so in order to stimulate economic growth many fiscal policies mean an increase in government spending, which may induce a budget deficit if tax receipts remain the same or decline in relation to the amount being spent. ...read more.

For example reducing the education budget may simply mean poorer standards of education and training schemes alike for older individuals would hold less value as cuts reduce the resources available to power such projects. This would reduce human capital as the growing population in a ?dumbed down? education system may mean fewer workers with skills, so vital jobs within the economy become unfulfilled as those with skills move to countries with their skills in higher demand and better wages. This would reduce the output of the country so GDP falls and FDI decreases, so the country is in worse off position. Not only for education, cutting the NHS budget would have a similarly disastrous result as absenteeism increases due to less facilities being able to handle less ill patients so the economy similarly slows down. The death rate increases as medical healthcare facilities become harder to reach due to the shutting down of A&E?s and hospitals and ambulance response time?s increase. ...read more.

Considering the fact that AD is built of C+I+G+(X-M) and consumption is 60% of AD, a drop in consumption may outweigh the benefits of the other components seeing an increase. This drop in AD would reduce GDP of the country and so foreign investors would see investing in such an economy as less appealing. Also hot money inflows causing the currency or £ in this case to appreciate may have entirely negative effect. An appreciation would see less export led growth as exports of the UK become more expensive for foreign countries and consumer alike to purchase, and for the domestic consumer’s imports become the cheaper option. Seeing as UK consumers can already be said to have a marginal propensity to import fuelled by an insatiable appetite, the balance of payments would appear to be working towards a more negative value so the current state of the economy of the UK worsens, detracting the value of FDI so growth is further limited and the budget deficit may see no reduction as the government is forced to pick up the pieces through increased government spending. ...read more.