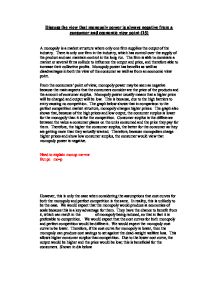 Discuss the view that monopoly power is always negative from a consumer and economic view point.

Discuss the view that monopoly power is always negative from a consumer and economic view point (15) A monopoly is a market structure where only one firm supplies the output of the industry. There is only one firm in the industry, which has control over the supply of the product and can maintain control in the long run. The firm is able to dominate a market or several firms collude to influence the output and price, and therefore able to increase their collective profits. Monopoly power has benefits as well as disadvantages in both the view of the consumer as well as from an economic view point. From the consumers' point of view, monopoly power may be seen as negative because the main aspects that the consumers consider are the price of the products and the amount of consumer surplus. Monopoly power usually means that a higher price will be charged and output will be low. This is because, due to the high barriers to entry causing no competition. The graph below shows that in comparison to the perfect competition market structure, monopoly charges higher prices. ...read more.

Therefore, the increase in competition causes the abnormal profit to be competed away. However, this does not apply to monopolies because there is no competition in the market structure. This causes the monopolies not to be efficient. This is because they have no incentive to become efficient, as they are complacent. The fact that costs are not minimised by effective management is called x-efficient. However, in a natural monopoly, where the economies of scale are really high, they could be efficient due to the shape of the long run average cost curve. This could allow them to be productively efficient. Another factor, which would consider that monopoly power, is negative. From an economic view, is the resource costs involved. The cost of maintaining a monopoly in its position is really high, which can in most ways be seen as the misusing of scarce resources. A monopoly, to get to its position, will require resources, for example, barriers to entry. This use of resources allows monopolies to be in their position and can be seen as misused because resources are being used and no extra output is being produces. ...read more.

As well as being productively efficient, natural monopolies have low prices, which is favourable to consumers. However, although this could be the case, it is unlikely because there are not many natural monopolies that exist. From an economic point of view, monopoly power could be considered to be beneficial because they are able to participate in innovation. Long-term abnormal profit can give monopolies the incentive to invest more heavily in research and development. This investment could cause lower prices, which the monopoly can use to give a return on the initial capital costs. However, under certain circumstances this may not be the case because there is no certainty that the monopolist will innovate. The security of very limited competition means there are no immediate market pressures on the monopolists to reduce costs and innovate at all. Also, monopolies may not innovate because it would mean that their costs would be high in the short-run. Develop the however more Overall, there are many negative impacts of monopoly power; however, there are also benefits, both to the consumer and from an economic view. We can definitely reach the conclusion that monopoly power is not always negative as there are advantages. However, overall, the disadvantages do overpower the advantages of monopoly power when considering the view economically or form the consumers' view ...read more.