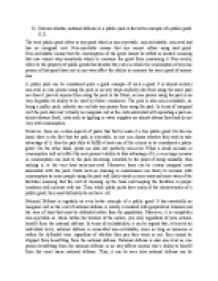 Discuss whether national defence or a public park is the better example of a public good. [12]

Transfer-Encoding: chunked ﻿1. Discuss whether national defense or a public park is the better example of a public good. [12] The term public good refers to any good which is non-rejectable, non-excludable, non-rival and has no marginal cost. Non-rejectable means that one cannot refuse using said good. Non-excludable means that the consumption of the good cannot be stifled or limited, meaning that one cannot stop somebody which to consume the good from consuming it. Non-rivalry, refers to the property of public goods that denotes they way in which the consumption of any one person of that good does not in any way affect the ability to consume the same good of anyone else. A public park can be considered quite a good example of such a good. It is almost entirely non-rival as one person using the park in no way stops anybody else from using the same park nor does it prevent anyone from using the park in the future, as one person using the park in no way degrades its ability to be used by future consumers. ...read more.

Moreover, there can be certain marginal costs associated with the park. Costs such as cleaning or maintenance are likely to increase with consumption as more people using the park will likely result in more trash and more wear of the facilities meaning that the cost of cleaning up the trans and keeping the facilities in proper condition will increase with use. Thus, while public parks have many of the characteristics of a public good, they most definitely do not have all. National Defense is arguably an even better example of a public good. It has essentially no marginal cost as the cost of national defense is mostly correlated with geopolitical tensions and the area of land that must be defended rather than the population. Moreover, it is completely non-rejectable as, while within the borders of the nation, you will, regardless of your actions, benefit form the national defense. In terms of excludability, it can be argued that, at least at an individual level, national defense is somewhat non-excludable, since as long as someone is within the defended area, regardless of whether they pay their taxes or not, they cannot be stopped from benefitting from the national defense. ...read more.