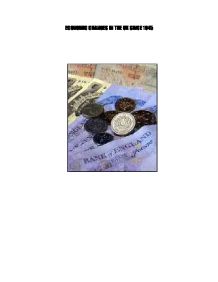 Economic changes in the UK since 1945

ECONOMIC CHANGES IN THE UK SINCE 1945 Introduction The aim of this assignment is to make comparisons between two important post WW2 decades and try to explain the differences in economy and economic policy of the two decades. In 50s UK was a major world power, militarily and economically, but it had lost all that dominance in 70s because of the slowness in its economy and partly because of major political and economical mistakes, the other reason being was the slow economic growth of the UK compared to other industrialised countries. Another big difference in the two decades were the economic policies, and theories used by the government. The government of the 1950s were using more of Keynesian theories and were trying to control the economic factors (e.g. Inflation, unemployment) using Keynesian theories and demand side policies. Whereas the governments of the 1970s were using and implementing Monetarist (Supply & money side policies), they were beginning to realise that Keynesian policies were ineffective. In the two decades, labour government tended to be more Keynesian and Conservatives tended to be more Monetarist. Average inflation in 50s was 4.7 %, but in 70s it was 14.8%. The 1956 Suez crises resulted in the decreased the dominance of UK in international arena and showed how powerful USA really was. ...read more.

I think the 50s were also a decade of lost opportunities. When in 1958 the EEC was formed, went up and running, all UK did was sit and watch, actually (thanks to government errors in the time) UK only joined the community in 1973. We see that this was a big loss in terms of opportunities for UK if we look back today; the rate of growth and the competitive pressure inside the union was much higher than compared to commonwealth countries that UK chose to trade with at that time, UK would have been much better off choosing the EEC rather then commonwealth long before. The governments of 1950s had a lot of confidence from businesses and workers then the governments of 1970s, there are couple of reasons for this, mainly it was because of the difference in economic stability of two decades, 70s governments especially the conservatives made many 'U' turns in their policies, for example in 1970 when Mr Heath came in charge he promised a policy of 'disengagement' in the economy, but in 1974 he broke that promise and nationalised some key companies, and took other contradicting actions. You could say he was forced and justified to do what he had to do because of development outside his power and outside UK (the oil crisis of late 1973). ...read more.

(These figures are illustrated in appendices) The reason for the increase in the level of unemployment during these periods was because of the internal and external shocks the country experienced, UK was not the only country to experience a rise in unemployment, the developments also happened in Europe. During the 1950's Inflation levels in the UK were much lower and stable compared to the inflation levels in the 1970's. The inflation levels in the 1950's were around 8% and were stable; however during the 1970's this figure had increased over three times the amount. After the start of the 1970's inflation levels in the UK was constantly at an increase and had reach up to almost 27%. (These figures are illustrated in appendices). Both the levels of unemployment and inflation in the UK were quite low and stable during the 1950's, however dramatically increased during the 1970's. The rapid increase of unemployment moved the government to take reflationary measures a little ahead of the great international boom of 1973 so that unemployment tumbled from 900,000 to 500,000 at the end of 1973 and output grew faster (by 7.3 %) than in any post-war year. The Economy of both decades shows a very parallel progress with other industrial countries, showing us how interdependent Economies of countries really were and this is still true today. 1 ...read more.