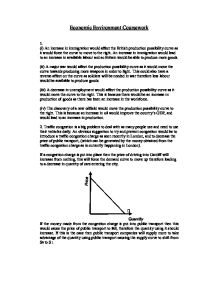 This shift means that car manufactures would need to decrease the price of cars in order to keep demand the same, but in doing so they would be moving down the supply curve and so would be less enticed to manufacture so many cars. 5. A monopoly is a type of market that has many buyers but only one supplier; this can cause major problems to the economic efficiency. The monopolist can decide the market price of the product and has "market power". This can be done as there are no close competing substitutes, which could cause a problem to smaller firms trying to enter the market with similar products, but not being able to due to the dominance of the monopolist. In a monopoly there are barriers to entry which prevent rivals entering the market to compete; these barriers are legal protecting a firm from competition from potential threats. ...read more.