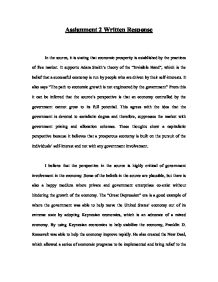 Economics source based paper. In the source, it is stating that economic prosperity is established by the practices of free market. It supports Adam Smiths theory of the Invisible Hand

Assignment 2 Written Response In the source, it is stating that economic prosperity is established by the practices of free market. It supports Adam Smith's theory of the "Invisible Hand", which is the belief that a successful economy is run by people who are driven by their self-interests. It also says "The path to economic growth is not engineered by the government" From this it can be inferred that the source's perspective is that an economy controlled by the government cannot grow to its full potential. This agrees with the idea that the government is devoted to socialistic dogma and therefore, suppresses the market with government pricing and allocation schemes. These thoughts show a capitalistic perspective because it believes that a prosperous economy is built on the pursuit of the individuals' self-interest and not with any government involvement. ...read more.

Today some of Roosevelt's New Deal programs and practice of Keynesian economics are still used to help strengthen and stabilize the economy. Since the "Great Depression" there have not been depressions of the same degree of severity. So, through Roosevelt's actions towards times of economic crisis and the fact that some of his economic strategies are still being used today, it can be seen that government involvement is beneficial to the growth of the economy. Thus, a mixed economy is one that is able to achieve national objectives by accommodating the needs of those who support private or public enterprises. Affluent and ever-growing economies are built on the values of capitalism and socialism. In private enterprises that are unregulated by the government, workers are exploited in the pursuit to maximize profits. ...read more.

Government involvement in the economy can aid a country to prevent economic disaster and allows its economy to prosper, even though some of the wealth is being distributed among the citizens. In order for a strong and affluent economy both socialist and capitalist values must co-exist and work together as an antagonistic system that allows the economy to remain central of the two beliefs. These points support the position that I have taken; that qualities of both capitalism and socialism establish the foundation for prosperity and growth within an economy. Values of a mixed economy enable more liberal beliefs to be present in the economy by letting people judge for themselves what sector they want to work in. It also creates a sense of collectivism because financial security is created through social programs, unions, and welfare. ...read more.