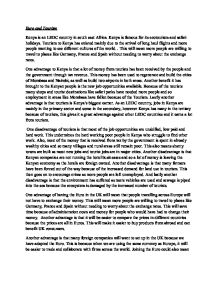 Euro and Tourism Kenya is an LEDC country in south east Africa. Kenya is famous for its ecotourism and safari holidays. Tourism to Kenya has existed mainly due to the arrival of long haul flights and more people wanting to see different cultures of the world. . This will mean more people are willing to travel to places like Germany, France and Spain without needing to worry about the exchange rates. One advantage to Kenya is that a lot of money from tourists has been received by the people and the government through tax revenue. This money has been used to regenerate and build the cities of Mombasa and Nairobi, as well as build two airports in both areas. Another benefit it has brought to the Kenyan people is the new job opportunities available. Because of the tourists many shops and tourist destinations like safari parks have needed more people and so employment in areas like Mombasa have fallen because of the Tourism. ...read more.

This will mean more people are willing to travel to places like Germany, France and Spain without needing to worry about the exchange rates. This will save time because of administration costs and money for people who would have had to change their money. Another advantage is that it will be easier to compare the prices in different countries because the prices are all in Euros. This will make it easier to buy products from abroad and can benefit UK consumers. Another advantage is that many foreign companies will want to set up in the UK because we have adapted the Euro. This is because when we are using the same currency as Europe, it will be easier to trade and collaborate with firms across the world. Joining the Euro could also mean that international companies will trade with one large country instead of several. This could mean more jobs, time and money for many firms in the UK. ...read more.

Tourists no longer visit this area. Another problem is that quarrying causes a lot of dust and pollution. Quarries in the peak district use huge water sprays to reduce this. Also, Lorries which transport the limestone make a lot of noise and have to travel on already congested roads used by many tourists. The peak district has tried to combat this problem by using the railway from tunstead and hope. However, there are many opportunities from quarrying. The quarry accounts for 10% of male employment. With 8% of males left unemployed in and around the peak district, the quarries are a major source of income. Also, where the quarries are located, the local area has improved. For example, the large dam for the reservoir was strengthened using the limestone quarried from the peak district. This benefits the local community. And lastly, once the companies have finished quarrying, most of them regenerated the land and put back all the soil dug out. This sometimes improves the landscapes and the land use is returned to normal as it was before but replanting etc. ?? ?? ?? ?? ...read more.