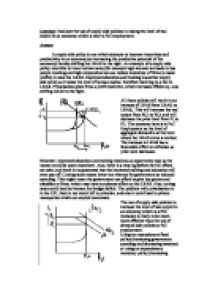 The increase in LRAS has a favourable effect on inflation as price level decreases. However, improved education and training involves an opportunity cost as the money could be spent elsewhere. Also, there is a time lag before the full effects are seen, and there is no guarantee that the improved training and education will even pay off. Cutting taxes means lower tax revenue for government so reduced spending. This might mean the government can afford to give less grants and subsidies to firms, which may have an adverse affect on the LRAS. Also, cutting taxes could lead to/worsen the budget deficit. ...read more.

or using an expansionary monetary policy (increasing quantitative easing and decreasing interest rates) will shift AD from AD1 to AD2. This is because consumption increases due to lower interest rates (easier to borrow money to finance credit purchases, lower interest rates on mortgages, lower taxes such as VAT), investment goes up (again easier to borrow money, lower taxes) and government spending goes up. The increase in AD results in an increase in the price level from Pl1 to PL2. However, the level of real output at full employment does not change, and stays at RO1, so using demand side policies at full employment will be purely inflationary. Therefore supply side policies are more effective as they do actually increase the level of real output, and have a favourable effect on inflation. ...read more.