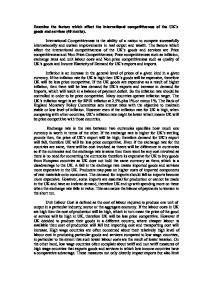 If the labour costs in UK are high then the cost of production will be high, which in turn mean the price of the good or service will be high in UK, therefore UK will be less price competitive. However if UK decided to produce their goods in a different country, where cheaper labour is available then cost of production will fall but importing cost and transporting cost will increase. High wage countries are often concerned about their relatively high level of labour cost in producing particular goods and services compared to low wage countries, in particular to the extent that such lower labour costs are the result of lower taxation. On the other hand, low wage countries often complain about tariff and non tariff measures of high wage countries that exports goods and services in which low income countries have a comparative advantage. These measures not only directly impact exports but also limit technology transfer to developing countries through restricting imports. However the difference in Unit Labour Cost levels across countries always depends on the source from which the change came from. ...read more.

Also if imports for luxury goods increases then UK may try to produce their goods with better quality so this will also encourage UK producers to produce their goods as how the consumers want. When looking at the price competitive factors, the most important factor is the exchange rate as it affects everything including both exports and imports of goods and raw materials. UK cannot produce goods without raw materials, which are needed to be imported from other countries, but in order to buy those raw materials, UK have to buy their currency then buy the raw materials which costs a lot. Exchange rate also affects the export as if exchange rate is too high then its really hard for UK to sell their goods. When looking at the non price competitive factors, the most important factor is the quality of UK's goods. Even if the income increases, If the quality of UK's good is enough then the consumers will not seek for importing goods so its mainly the quality of goods which is the non price competitive factor which affects the international competitiveness of the UK's goods and services. ...read more.

This essay engages well with the question. There is a breadth of factors discussed here, and it's good to see such a wide knowledge. It was good to see a sustained awareness of the difference between price and non-price factors, ...

This essay engages well with the question. There is a breadth of factors discussed here, and it's good to see such a wide knowledge. It was good to see a sustained awareness of the difference between price and non-price factors, as in my experience many people simply look at price being the strongest element. You cannot underestimate quality of products, and this essay does well in including this! This question doesn't explicitly ask for the extent to which each factor affects competitiveness, but this would've added to the conclusion.

The analysis in this essay is sound, and I like the progression in each paragraph. Each paragraph starts with a clear signpost stating why it is relevant to international competitiveness, and then goes onto define any terms if necessary. Being able to do this concisely is a good skill, and this essay does this well. There is then a clear analysis of why this factor affects international competitiveness. I would've liked to have seen a diagram somewhere in this essay, as it's an easy way to gain marks. Showing a shift in the demand and supply for pounds, possibly, changing the exchange rate would've sufficed if an explanation was given. It was good to see that the essay mentioned inflation rates only affect competitiveness if they are relatively higher than other economies. Being able to show this awareness will gain credit! I would've liked to have seen some trends discussed which were particular to the UK, as this shows the ability to apply knowledge. When talking about the quality of products, the essay could've gone much further in discussing structural issues in the UK economy. If I were doing this essay, I would've looked at comparative advantages and how the UK's has changed in recent years, affecting international competitiveness.

The structure in this essay is strong. There is a clear introduction which defines the key terms which are to be explained, and the conclusion poses a judgement on the significance of factors. It was a shame to see a few spelling mistakes, and there are times where words are capitalised when they needn't be. For example "goods and services are Price competitiveness and Non-Price Competitiveness" - these aren't proper nouns and so don't need capital letters. A simple proof read should remove any of the spelling mistakes.