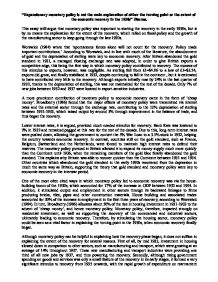 Expansionary monetary policy is not the main explanation of either the turning point or the extent of the economic recovery in the 1930s Discuss.

"Expansionary monetary policy is not the main explanation of either the turning point or the extent of the economic recovery in the 1930s" Discuss. This essay will argue that monetary policy was important to starting the recovery in the early 1930s, but is by no means the explanation for the extent of the recovery, which relied on fiscal policy and the growth of the manufacturing sector to keep going through the late 1930s. Worswick (1984) wrote that 'spontaneous forces alone will not count for the recovery. Policy made important contributions.' According to Worswick, and in line with much of the literature, the abandonment of gold and the depreciation of sterling were key to economic recovery. After Britain abandoned the gold standard in 1931, a managed floating exchange rate was adopted, in order to give British exports a competitive edge, this being the first way in which monetary policy contributed to recovery. The success of this stimulus to exports, however, was negligible. As sterling fell from �1=$4.86 to a low of �1=$3.24, exports did grow, and finally stabilised in 1932, despite continuing to fall in the continent, but it is estimated to have contributed very little to the recovery. Although exports initially rose by 24% in the last quarter of 1932, thanks to the depreciation of sterling, this was not maintained for the rest of the decade. ...read more.

In turn, Broadberry (1986) allocates about 50% of the rise in housing investment in 1931-1933 to the advent of 'cheap money', and hence monetary policy. Monetary policy, therefore, impacted strongly on residential investment, as well as supporting the recovery of the commercial and industrial sectors, ultimately leading to economic recovery. Therefore, by stimulating the housing sector, monetary policy could be seen as a vital factor in explaining the turning point in the 1930s, when economic recovery finally began. Although monetary policy can be helpful in explaining how the recovery phase began, it does not suffice in explaining the extent of the recovery for several reasons. First of all, by mid 1933, investment in housing slowed down in comparison to other sectors, such as manufacturing and transport, which were growing at an average of 14% throughout 1937. These new manufacturing and transport industries were providing one third of all new jobs by 1937, and thus powering the recovery. Secondly, although rising government spending on goods and services was only a small feature of the recovery in its early stages, it formed a very significant stimulus to recovery from 1935 onwards, with the rapid growth of expenditure on rearmament ensuring that the 1937-1938 recession was of short duration and that the economy was growing rapidly by the eve of the Second World War. ...read more.

As noted by Mowat (1955), "The deflationary phase of the National government's policy was short-lived . . . [their] financial policies made the best of both worlds; they seemed sufficiently deflationary to restore confidence; they were in fact sufficiently inflationary to assist recovery by maintaining the purchasing power of the people." However, had the recovery not commenced, cheap money not been successfully implemented, and fiscal window-dressing not deployed extensively, then the year would almost certainly have closed with a substantial deficit. As it was, a deficit of �32.3m (0.9 per cent of GDP) was posted, but this was not corrosive of confidence in the way that it would have been even 12 months earlier, and by the following year a surplus of almost the same sum was achieved. Thereafter, for the next 3 years, recovery in the public finances tracked recovery in the real economy, providing scope thereby for tax remissions and a resumption of expenditure growth. We can therefore conclude that although expansionary monetary policy helped to start the recovery in the early 1930s, it is by no means the main explanation for the extent of the recovery. Monetary policy stimulated recovery via the housing market in the early 30s, but it was a combination of growth in the manufacturing sector post 1933 and fiscal policy, especially post 1935, which contributed to keeping the recovery on track and speeding up the growth of GDP. ...read more.