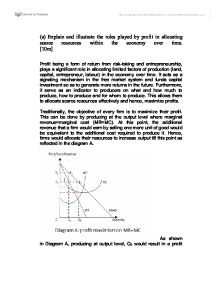 Explain and illustrate the roles played by profit in allocating scarce resources within the economy over time.

(a) Explain and illustrate the roles played by profit in allocating scarce resources within the economy over time. [10m] Profit being a form of return from risk-taking and entrepreneurship, plays a significant role in allocating limited factors of production (land, capital, entrepreneur, labour) in the economy over time. It acts as a signaling mechanism in the free market system and funds capital investment so as to generate more returns in the future. Furthermore, it serve as an indicator to producers on what and how much to produce, how to produce and for whom to produce. This allows them to allocate scarce resources effectively and hence, maximize profits. Traditionally, the objective of every firm is to maximize their profit. This can be done by producing at the output level where marginal revenue=marginal cost (MR=MC). At this point, the additional revenue that a firm would earn by selling one more unit of good would be equivalent to the additional cost required to produce it. Hence, firms would allocate their resources to increase output till this point as reflected in the diagram A. ...read more.

For example, Apple Company uses supernormal profits earned from selling its products for research and development such as improving of IPhone 3 to IPhone 4. Hence, this would allow better allocation of scarce resources and allow firms to achieve dynamic efficiency. Profits also serve as a signaling mechanism in the free market system. In economy, some good may generate subnormal profits while others may generate supernormal profits. When faced with such situation, firms in the economy could shift their resources from producing the subnormal profits goods to producing the supernormal profits goods. This is because these firms hope to acquire the highest rate of returns. For example, in the disk industry, consumers' preferences have changed from VCDs to DVDs and Blu-ray due to the higher definition and greater memory space. As such, over the years, the number of VCDs produced has reduced while the number DVDs and Blu-ray has increased. Below is graphical representation of the market system of VCDs as well as DVDs and Blu-ray. As shown by the graphs, the demand curve for VCDs have shift to the left while the demand curve for DVDs and Blu-ray have shift to the right. ...read more.

An example of such sector is the Family Travel Agency which hopes to ensure its survival in this highly competitive sector. Therefore, they are less concern with the profits made in the short run and focus more on attracting and retaining customers. (this point maybe can expand and drawn some diagram to have some analysis) It is also an assumption that there is perfect information in the economy about the costs of production and revenue conditions. However, this is not possible due to the presence of imperfect information in real world market structure. Furthermore, there are other players that play a role in resource allocation in the economy such as the government. Decisions about resource allocation taken by the government are rarely driven by the profit motive as public sector capital projects may be undertaken on the basis of a cost-benefit analysis of the social costs and social benefits of a particular project. In conclusion, profits act as a signaling mechanism in the free market system and funds capital investment so as to generate more returns in the future. Thus, profits play a significant role in allocating limited factors of production in the economy over time. ?? ?? ?? ?? ...read more.

An excellent piece of work that achieves its purpose well

This essay engages well with the question. There is a sustained awareness of why profit is crucial in acting as mechanism. I would've liked to have seen this essay explore efficiency more, as that is what the question is implicitly ...

This essay engages well with the question. There is a sustained awareness of why profit is crucial in acting as mechanism. I would've liked to have seen this essay explore efficiency more, as that is what the question is implicitly asking. Yes, efficiency is discussed, but it isn't the focus of the essay. There needs to be exploration of allocative efficiency and productive efficiency, and why profit ensures these are reached. I wasn't too sure why they discussed "not all firms seek to maximise profits" as this isn't prompted in the question. It is crucial to stay on focus!

The analysis in this essay is sound. The introduction clearly defines profit, however it was a shame to see normal profit not explored. In economics, normal profit includes the cost to the entrepreneur to stay in the industry, and so where total costs equal total revenue a normal profit is made. This is not to be confused with other subjects whereby profit is simply revenue minus costs. In the case of economics, if total revenue exceeds total costs, this is supernormal profit. Profit maximisation is well explained, and I liked there is a clear explanation of why a firm products at MC=MR. Often, this condition is asserted rather than explained, and the second paragraph is a great example of explaining this in a concise way. Being able to show such understanding will gain credit. Diagrams are used well, and are explained fluently. Being able to describe the diagram and explain the mechanisms, rather than simply including diagrams and asserting knowledge, will gain plenty of marks! What is missing from the diagrams is a discussion of the two efficiencies. I would've liked to have seen an awareness of allocative efficiency (P=MC) and productive efficiency (lowest point on average cost curve) and how profit will affect whether these efficiencies occur. I liked how they discuss external factors affecting resource allocation, as it is clear that most economies are no longer free market and so there is always an element of government intervention. Such perceptive analysis will gain credit.

This essay is structured well, having a clear introduction and conclusion. However, a clear introduction usually means the essay stays focused on the task, whereas this essay tends to move away from the question. It is vital that any unnecessary points are removed, as it makes an argument less convincing! Spelling, punctuation and grammar are strong and technical terms are used throughout.