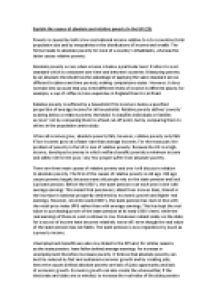 Explain the causes of Absolute &amp; Relative Poverty in the UK

﻿Explain the causes of absolute and relative poverty in the UK (15) Poverty is caused by both a low real national income relative to a to a countries total population size and by inequalities in the distributions of income and wealth. The former leads to absolute poverty for most of a country?s inhabitants, whereas the latter causes relative poverty. Absolute poverty occurs when income is below a particular level. It refers to a set standard which is consistent over time and between countries. Measuring poverty by an absolute threshold has the advantage of applying the same standard across different locations and time periods, making comparisons easier. However, it does not take into account that you need different levels of income in different places, for example, a cup of coffee is more expensive in England than it is in Brazil. ...read more.

Income support is an extra benefit to people on low incomes, such as the elderly who would otherwise be completely reliant on the state pension, and to families otherwise dependent solely on the unemployment benefit paid to one of the families members. Incapacity benefit is a weekly payment for people who become incapable of work while under the state pension age. The low-waged, unlike the un-waged, are workers with jobs, albeit jobs in which their hourly and weekly earnings are low. The low waged include many unskilled workers, together with the skill workers who have lost their jobs in the manufacturing industry and who have had to trade down to unemployment in more menial unskilled activity. The low waged poor are almost always relatively poor rather than absolutely poor. In contrast the many homeless people living on the street fall into the category of absolutely poor. The introduction of the national minimum wage was an attempt to reduce the poverty of the low waged. ...read more.