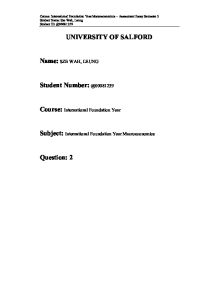 Explain the meaning of the term 'inflation'.

UNIVERSITY OF SALFORD Name: SZE WAH, LEUNG Student Number: @00081259 Course: International Foundation Year Subject: International Foundation Year Macroeconomics Question: 2 Question 2a) Explain the meaning of the term 'inflation'. Along with the development of society more and more problems are brought to our attention, one of which is that 'inflation'. Nevertheless, with the advance of the human civilization, the living standard increases gradually so the price index and Retail Price Index (RPI) rise gradually as well. Deep down, 'inflation' means a persistent increase in all money prices over a period of time which is generally considered to bring costs to society is the form of material, political and psychological costs. Also, the increase must be sustained at some rate before there is inflation and when the price level increases steadily over time. 'Inflation' that is to say, it is decrease in the purchasing power and all money prices to the same extent. In economic, inflation is measured as a percentage change in the PRI over a given period of time, for example, if the RPI increases from 100 to 200 in a year, then inflation is said to have increased by 20% that year. In the UK, the Retail Prices Index is most commonly used measure of inflation. Because RPI is measure the cost of living index, it can reflex the money price level such as through the changes in the prices of goods in the shops by households. ...read more.

It exist is due to excess demand. It means that the resources are not completely sufficient the different regions and sectors of the economy. Demand inflation means the higher aggregate level of activity, the large proportion of areas and industries which experience excess demand for goods and labors of various sorts. Generally, we can know that increase in aggregate demand will cause higher prices and it bring to the society of cost inflation as well. However, cost-push inflation is reverse of demand-pull inflation. Cost inflation is due to increase the factor input cost such as imported goods and raw materials so that cause to raise the prices or wage rates round the economy. Basically, the costs increase would cause the manufacturer to raise prices, soon afterwards, increases in prices cause workers to demand higher wages as well. So the cumulative effect of all these processes cause of passed on in higher prices to consumers and the cost-push inflation is extremely difficult to stop finally. Question 2c) Suggest how a government might tackle inflation. In economics, there are four ways of dealing with inflation. Fist, government can adopt tough incomes policies to keep inflation under control. Second, government can through institutional and constitutional reform to tackle inflation like as fiscal and monetary policies. Third, government can adopt indexing deal with inflation as well. ...read more.

From figure 2c, which express the price level decrease from P1 to P2 due to the Central Bank increase in interest rates, there is evidence that once increase in interest rates would cause to decrease the aggregate demand as well. To put it more simply, there is also indication that rise in interest rates may exert a downward pressure on prices. Figure 2c: A rise in the rate of interest effect. Third, the government can adopt indexing to tackle inflation. Whereas indexation might automatically adjusts nominal contracts for the effects of inflation, any unanticipated inflation and inflation effect can be tackled. For instance, wage rates, pensions, interest payments on bonds, income taxes and many other things can be indexed in this way. Indeed, the purpose of indexing is to reduce the social cost of inflation. However, everything has a good side and a bad side, and indexing is no exception. Some economists worry about that people would diminish the confidence combating inflation even all prices and terms in contracts will be adjusted according to the price index. Historically, indexation has already been introduced in countries that have had to live with inflation rates of 30 or 40 per cent for years. Finally, there are many ways might tackle inflation for government. Income policies, institutional and constitutional reform with fiscal and monetary policies and indexing are the process to tackle inflation efficiently. Course: International Foundation Year Macroeconomics - Assessment Essay Semester 2 Student Name: Sze Wah, Leung Student ID: @00081259 ...read more.